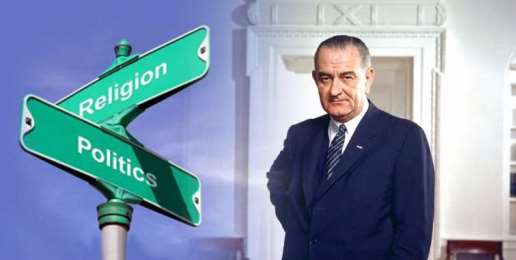 If President Trump succeeds in removing the oppressive Johnson Amendment, which limits freedom of speech from the pulpits, will Christian leaders be more outspoken on controversial moral, cultural, and political issues? I have my doubts, since I don’t believe it is the Johnson Amendment that has muzzled preachers across America.

I believe it is the fear of man that has muzzled us and it is our desire to be affirmed by the world that has silenced us. Until we repent of these sinful, carnal attitudes, our tongues will not be loosed. We have been paralyzed from the inside, not the outside, and the removal of outward hindrances will not set us free within.

Let’s be honest about this. The Johnson Amendment, as wrong as it is, is quite limited in its scope, primarily prohibiting “certain tax-exempt organizations from endorsing and opposing political candidates.”

It does not prohibit pastors from speaking out against a host of other moral and cultural issues, yet it is here that we have seriously failed our people — I say “we” because I too am a ministry leader, although not a pastor — since these are the very issues so many of us studiously avoid.

Who needs the controversy? Who wants to be vilified? Why stick your hand into a hornet’s nest? Why ask for trouble?

What Really Holds Pastors Back

You might say, “Maybe some pastors think like this, but that’s not the real issue for them. The issue is that they don’t want to distract from the gospel. They just want to tell people about Jesus.”

Unfortunately, this line of reasoning doesn’t hold water, since Jesus Himself was tremendously controversial — if memory serves me right, He was actually put to death by His generation — and He said that if we followed Him faithfully, we would be hated just as He was hated (see John 15:18; Matthew 10:24).

Why is it, then, that the same world that hated him so much loves us so much? Why is it that He offended so many — by being a perfect, shining light, full of grace and truth — yet we offend so few? (Sad to say, when we do offend people, it is often due to us being offensive and obnoxious or hypocritical and self-righteous rather than shining so brightly that people hate our light.)

It is true that Jesus was a friend of sinners — especially the societal outcasts — and we do well to follow His example. But it is equally true that He was a threat to all that was wrong in His society — including the religious establishment — while we frequently find ourselves completely at home in this world. How can this be?

In 2014, George Barna discussed the results of his latest poll during an interview on American Family Radio. He explained that, “What we’re finding is that when we ask [pastors] about all the key issues of the day, [90 percent of them are] telling us, ‘Yes, the Bible speaks to every one of these issues.’ Then we ask them: ‘Well, are you teaching your people what the Bible says about those issues?’ and the numbers drop … to less than 10 percent of pastors who say they will speak to it.”

And what, exactly, holds them back from addressing controversial issues from the pulpit, including, “societal, moral and political issues”? According to Barna, “There are five factors that the vast majority of pastors turn to. Attendance, giving, number of programs, number of staff, and square footage.”

Yes, at all costs, we must avoid the controversy that will stop us leaders from fulfilling the Christian version of the American dream: Great success and popularity, and a happy, financially prosperous congregation, all made possible by preaching a watered-down gospel.

This mindset has nothing whatsoever to do with the New Testament faith.

The Deliberate Disobedience of America’s Pastors

Fired up by the results of the Barna poll, pastor and radio host Chuck Baldwin wrote,

Please understand this: America’s malaise is directly due to the deliberate disobedience of America’s pastors — and the willingness of the Christians in the pews to tolerate the disobedience of their pastor. Nothing more! Nothing less! When Paul wrote his own epitaph, it read, “I have fought a good fight, I have finished my course, I have kept the faith.” (II Timothy 4:7) He didn’t say, “I had a large congregation, we had big offerings, we had a lot of programs, I had a large staff, and we had large facilities.”

Are his accusations too harsh? In many cases, yes, since there are sincere shepherds who simply feel ill-equipped to address the hot-button issues of the day, instead finding their gifting in the systematic teaching of the Scriptures and caring for their flocks. It is not fear that holds them back as much as a sense of calling to minister in a different way.

But in all too many cases, Baldwin’s accusations are right on target: We have compromised for the sake of comfort and convenience. We have found a way to bypass the Cross and its shame. We have created a no-cost, pop-gospel, forgetting that a gospel that costs nothing saves no one and is not a gospel at all.

The irony of all this is that Barna’s survey also indicated that the vast majority of Christians surveyed — around 90 percent — wanted their pastors to address these difficult moral and cultural issues, since this is the world they live in and these are the problems they confront, right down to their kids in nursery school.

They are expecting their pastors and leaders to help them sort these things out based on scripture, and they are frustrated and grieved when the men and women they look to are not there when they need them. Shouldn’t the shepherds care more about the well-being of their flocks than their own popularity? Shouldn’t the pastors care more about the health of their congregation than the wealth of their congregation?

To be clear, I have preached in wealthy, large mega-churches that are not afraid to tackle the controversies and I have preached in poor, small churches that are afraid to tackle these issues. The fear of man comes in many shapes and sizes, but the expression of it will always be the same: You will not do what you know is right because you fear the negative consequences.

That is a fear that must be broken, and it is only the Lord — not Donald Trump — who can help us break it.

Will we rise to the occasion, when society needs us the most, or we will cower behind our cheap excuses?

It’s time for the lion to roar.