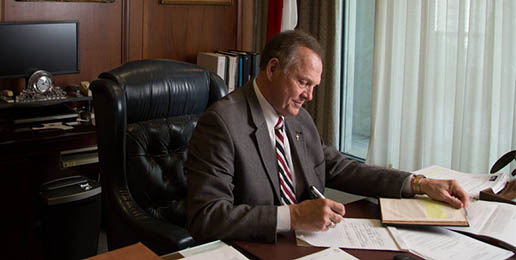 Under the “progressive” leadership of Barack Obama and his like-minded “social justice” warriors throughout all levels of government, we have entered an era of lawlessness unprecedented in American history. This is no more apparent than in Alabama where Chief Justice Roy Moore of the Alabama Supreme Court has been unlawfully removed from the bench at the hands of liberal activists on Alabama’s Court of the Judiciary (COJ).

The case is under appeal.

This miscarriage of justice was carried out at the behest of the left-wing extremist Southern Poverty Law Center (SPLC), an anti-Christian activist organization that seeks to undermine, if not extinguish altogether, the free exercise of religion as guaranteed by the First Amendment to the U.S. Constitution.

To add insult to injury, Judge Moore’s law clerks were likewise terminated without warning or explanation late last week. The Chief quickly issued a statement in response: “My appeal is still pending but Justice Stuart [interim chief] is acting like she has already decided the appeal against me. I have asked Justices Stuart, Bolin, Main and Shaw to be recused from hearing my case. Justice Stuart’s action against me personally and the subsequent firing of the staff attorneys I hired is troublesome and such actions prejudge the case. Instead of acting as though my appeal has already been decided, I call upon these justices to recuse. None of them should have any role in appointing successor justices to hear my appeal.”

Chief Justice Moore further remarked, “I have been targeted for my belief in marriage, a belief shared by the majority of Americans. No one can point to any illegal, unlawful or unethical aspect of my four-page Administrative Order. That order was a status report on the case. A justice should not be removed from office because of a political agenda.”

The facts of the case are clear and beyond dispute. Chief Justice Moore was arbitrarily removed from the bench for a “2016 Administrative Order [that] was merely a status report of a pending case before the Alabama Supreme Court,” notes Mat Staver, chairman and founder of Liberty Counsel. “The order did not change the status quo. It did not create any new obligation or duty. To suspend Chief Justice Moore for the duration of his term is a miscarriage of justice and we will appeal this case to the Alabama Supreme Court. This case is far from over,” he added.

On September, 30 the COJ issued a decision on the trumped-up charges against Chief Moore. The Judicial Inquiry Commission (JIC) requested that he be removed from the bench. Under the COJ rules, removal requires a unanimous 9-0 vote by the members of the COJ, which is made up of judges, a lawyer and laypeople. Absent a 9-0 unanimous vote, the COJ cannot remove a judge from the bench. But, in an unbelievable violation of the law, the COJ suspended without pay Chief Justice Moore for the remainder of his term, which runs through January 2019. When his term expires, he will be ineligible to run for election as judge again because of his age. So the suspension until the end of his term is a de facto removal from the bench. This is both an unethical and illegal circumvention of the letter of the law.

“To suspend Chief Justice Moore for the rest of his term is the same as removal. The COJ lacked the unanimous votes to remove the Chief, so the majority instead chose to ignore the law and the rules,” concludes Staver.

The COJ’s disgraceful actions have resulted in a tremendous backlash among both the majority of Alabama voters, as well as legislators on both sides of the aisle. This has put both the SPLC and the COJ on the defensive. In a rambling screed written for Al.com, SPLC president Richard Cohen betrays his personal vendetta against Chief Justice Moore, his lack of knowledge about the U.S. Constitution and the laws of Alabama, as well as an astounding level of anti-Christian bigotry.

“Moore attempted to put his personal religious beliefs above the rule of law,” writes Cohen. “The United States has always been defined by a fundamental belief in the rule of law,” he adds, evidently oblivious to the jaw-dropping level of irony and hypocrisy found within his words.

Cohen goes on to slander Chief Moore, smearing him as “intoxicated with his own self-righteousness” and maligning him as having “disgraced his office.”

In fact, Cohen gets only one thing right, noting: “The court heard the case against Moore and rendered a decision it likely knew would be deeply unpopular across the state.”

Indeed, it’s little wonder the COJ knew its decision would be deeply unpopular. Most politically-motivated hit jobs are. Especially when they’re illegal.

Still, the blowback has begun and legislators are moving to undo the damage to the rule of law committed by the SPLC and its COJ cohorts. “This group of individuals are not accountable to the voters of Alabama,” observed Alabama GOP Chairman Terry Lathan in a statement. “Their charge as a body is to address and make decisions on corruption cases involving judges in Alabama. At no time has this case been about corruption,” he added.

“Judge Moore was elected, twice, by the citizens of our state. In light of this, two groups who are unaccountable to the voters have overstepped boundaries in suspending a statewide elected judge. On May 21, 2016, the Alabama Republican Party passed a resolution strongly opposing the removal of Chief Justice Moore.”

“On August 27, 2016, the Alabama Republican Party passed a resolution calling for the Alabama executive, legislative and judicial branches of government to enact and implement a law for the election of all members of the Judicial Inquiry Commission by vote of the people of Alabama.”

“We stand by our resolution of support for Judge Moore and our resolution to call for a vote of the people regarding the election of all members to the Judicial Inquiry Commission,” concluded Lathan.

With both potential legislation and the appeal pending, the Roy Moore saga continues. Will the rule of law be reestablished in Alabama, or will politically-motivated witch hunts such as this represent the future in the heart of Dixie?

If Alabama voters have any say, I expect to see justice done and this corrupt decision reversed.