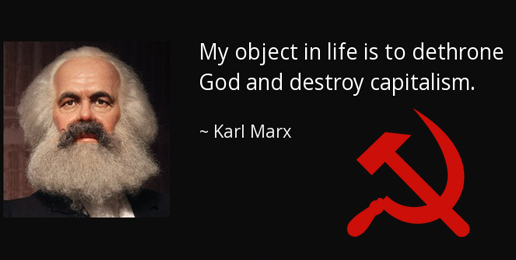 Friedrich Engels and Karl Marx are the mid-19th century philosophical fathers of Communism.  Both men epitomized the rally cry of Atheism which is “God doesn’t exist, and I hate him.”   They saw religion as a competitor to their agenda of a government-based socialistic society.

“All religion… is nothing but the fantastic reflection in men’s minds of those external forces which control their daily life, a reflection in which the terrestrial forces assume the form of supernatural forces.”

Regarding this rivalry, Engels observed:

“Both Christianity and the workers’ socialism preach forth coming salvation from bondage and misery; Christianity places this salvation in a life beyond, after death, in heaven; socialism places it in this world, in a transformation of society.”

Do government powers compete with faith?  More specifically, can big government displace religious faith?   When people can get things they want from the government as a provider, are they less likely to turn to God for help?  These are not strange questions.  In fact, researchers have a name for it.  They call it an exchange model of religion.

A new paper compiled by researchers from three universities published April 12th in Personality and Social Psychology Bulletin say that the answer to these questions is “yes.”   Big government replaces God for many people around the world.  They conclude that if some of the appeals of faith can be acquired from government, then religiosity declines in that society.

The researchers found a delayed effect between an increase in government services and a measurable decline in faith occurring one to two years later.  “If a secular entity provides what people need, they will be less likely to seek help from God or other supernatural entities. Government is the most likely secular provider,” the researchers concluded.

“The power and order emanating from God can be outsourced to the government,” the researchers claim.  I wonder how many politicians who are drawn to government doing more and more in every aspect of our lives realize that they are making a god out of government.  I suspect that many do know this.

The researchers compared state and country services as a percentage of gross domestic product with data about religion collected by Gallup from 455,104 people across 155 countries.