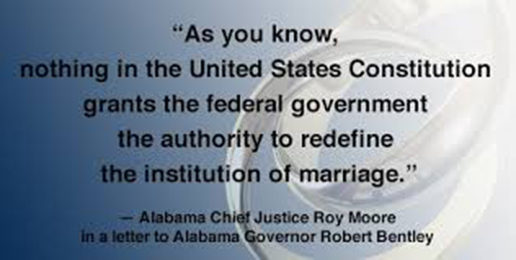 Probate Judge Don Davis asked to be relieved of the order because it would cause him to violate a federal court order that struck down the marriage law. On March 10, 2015, the Alabama Supreme Court issued a second order refusing to relieve him of the order and directing that he immediately cease issuing same-sex marriage licenses.

On March 12, 2015, the Alabama Supreme Court issued a third order directing that “all probate judges” in the state are subject to the March 3, 2015, order and that they must immediately cease issuing same-sex marriage licenses.

WHEREAS, the above referenced cause has been duly submitted and considered by the Supreme Court of Alabama and the orders indicated below were entered in this cause:

Along with the Judgment, the Alabama Supreme Court released the separate opinions of the Justices. In his 105-page opinion, in which he concurred in the Judgment, Chief Justice Roy Moore wrote the following:

Today this Court by order dismisses all pending motions and petitions and issues the certificate of judgment in this case. That action does not disturb the existing March orders in this case or the Court’s holding therein that the Sanctity of Marriage Amendment, art. I, § 36.03, Ala. Const. 1901, and the Alabama Marriage Protection Act, § 30-1-9, Ala. Code 1975, are constitutional. Therefore, and for the reasons stated below, I concur with the order.

Later in a public statement after the Judgment was issued, Chief Justice Roy Moore made the following statement:

The Court dismissed in its order “pending motions and petitions” in the API case today but did not dismiss “lawsuits” or dismiss the case. In fact, the Court also issued the certificate of judgment (COJ) which explicitly recognized the 3 orders issued in this case last year. As I stated in my written concurrence, the Court did not disturb the existing orders in this case or the holding in API that Alabama’s Sanctity of Marriage Amendment and the Alabama Marriage Protection Act were constitutional.