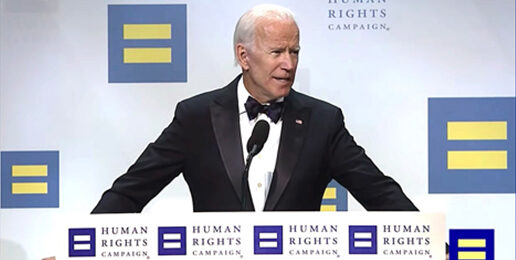 Remember when homosexual activists lied with straight faces saying what they do in the privacy of their own bedrooms affects no one and, therefore, is no one’s business? And here we are today with the government recognizing non-marital unions as marriages, shameful parades polluting our streets, drag queens reading stories to toddlers in public libraries, a 4,000 percent increase in adolescent girls suddenly deciding they’re boys, and schools requiring faculty to use incorrect pronouns when referring to students who seek to pass as the sex they aren’t.

An NBC News article titled, “Biden administration on track to be most LGBTQ-inclusive in U.S. history” exults, “President-elect Joe Biden has repeatedly vowed to make LGBTQ rights a priority in his administration.” We now have leaders—grown men and women—who think it’s a noble achievement to pick administration officials based on what they do in the privacy of their bedrooms or because they pretend to be the sex they aren’t. Astonishing.

In the service of demonstrating his ardent commitment to unbiblical sexual deviance, Biden, the less ardent, self-identifying Catholic has so far picked a number of sexually dubious characters for administrative roles and other assorted functions.

Biden chose Karine Jean-Pierre, an “out lesbian” as his deputy press secretary. She may help speak on behalf of the cognitively impaired Biden or clarify the baffling things he says when his handlers allow him to speak. He chose Pili Tobar, another lesbian, to be the deputy White House communications director.  And he chose homosexual Carlos Elizondo to be the White House social secretary.

Lesbian attorney Chai Feldblum and bisexual attorney Pamela S. Karlan, who is “married” to a woman, have been tasked with “reviewing the Department of Justice and related agencies for the Biden transition team … including the Federal Election Commission and the Commission on Civil Rights.”

Karlan’s name may be familiar to some. She is one of the three “progressive” law professors who testified before the U.S. House Judiciary Committee in support of the impeachment of President Trump and was forced to apologize for using Barron Trump’s name to make a point. She is also one of the attorneys in the infamous Bostock U.S. Supreme Court Case that Associate Justice Neil Gorsuch bungled.

Homosexual Dave Noble “was named to two teams, one reviewing the National Aeronautics and Space Administration and the other the Office of National Drug Control Policy.”

Shawn Skelly, a man who now masquerades as a woman following his 20-year stint as a naval flight officer, “will be part of the team reviewing the Department of Defense.” Biden has vowed to reverse President Trump’s ban on gender-deluded men and women serving in the military. I guess Skelly believes that nothing strengthens the military quite like the presence of cross-dressing soldiers and forcing women to bunk and shower with men who cross-dress.

Axios has reported that 39-year-old failed former mayor of South Bend, Indiana and homosexual, Pete Buttigieg, is being seriously considered for the ambassadorship to China, America’s arch-enemy that unleashed the Wuhan Virus on the world and seeks worldwide economic and military domination.

But the homosexual rag The Washington Blade reports that Buttigieg wants nothing less than a Cabinet post. In the Blade piece titled “Frustration builds as Biden’s Cabinet includes no LGBTQ picks,” Chris Johnson writes,

In talks with the Biden transition team, one Democratic insider said the idea of Buttigieg becoming White House OMB director came up, but he rejected it and said he wanted a “real Cabinet” position, not a “staff-level” job.

Behind the scenes the homosexual community is fuming that Biden hasn’t yet chosen a Cabinet member based on his or her private bedroom activities. Johnson continues,

Some LGBTQ leaders are quietly expressing frustration that the movement hasn’t pushed more aggressively for representation in Biden’s Cabinet. …

Things might be changing in terms of ramping up calls for an openly LGBTQ Cabinet member. On Tuesday, the congressional LGBTQ Equality Caucus made public a letter to the Biden transition team making the case for prominent LGBTQ appointees in his administration. “While your administration is on track to be the most diverse in American history, we ask that you continue your commitment to diversity by ensuring LGBTQ+ professionals are included in your Cabinet and throughout your administration. …”

For example, the country’s largest, most influential homosexual/“trans” activist organization, the Human Rights Campaign (HRC), whose 2019 revenue exceeded $44.5 million, has published a 24-page “Blueprint for Positive Change 2020” with a staggering list of “recommendations” for Biden. I’ll mention just two.

The HRC recommends changing a regulation regarding charitable organizations that partner with the federal government to help those with diverse problems and needs. The HRC wants to make sure that any religious charity that receives federal funds to help the suffering be forced to hire homosexuals and cross-sex impersonators.

The HRC’s blueprint for religious oppression also wants to make it possible for college accreditation boards to deny accreditation to any college that has employment or student conduct criteria that reflect biblical standards on sexuality. Such a radical accreditation change would constitute, in theologian Al Mohler’s words, “an atomic bomb.”

If Christian colleges cannot be accredited, then students who want to pursue masters’ degrees, Ph.D.s, law degrees, or medical degrees that require undergraduate degrees from accredited schools would be forced to go elsewhere.

Leftists want to close all avenues to positions of influence for those who reject their sexuality ideology. So much for diversity and tolerance.

Biden has promised that his first order of business will be to pass the pernicious Equality Act, which will happen if Republicans lose the Senate. The Democrat-sponsored Equality Act—which as everyone knows has nothing to do with equality and everything to do with oppression—will deny conservative people of faith First Amendment speech and religious free exercise protections.

As I wrote 1 ½ years ago when the U.S. House passed it, the Equality Act would require federal law to recognize disordered subjective feelings and deviant behaviors as protected characteristics. Federal law would absurdly recognize homoeroticism and cross-sex masquerading as conditions that must be treated like skin color and biological sex.

The real goal in the new and socially acceptable form of discrimination is to normalize homoeroticism and cross-sex impersonation by exploiting the instruments and institutions of power to silence public expressions of moral beliefs that leftists don’t like.

The first step is to confuse the issue by treating dissimilar conditions as if they were the same. So, conditions that are not genetically determined, in many cases fluid, and constituted centrally by freely chosen acts (e.g., homoeroticism and opposite-sex identification) are compared to conditions that are 100% heritable, in all cases immutable, and have no behavioral dimensions (e.g., skin color and biological sex). This is called a “category mistake.”

Homoeroticism and cross-sex passing are moral issues about which it is entirely fitting to express views even if others disagree with or detest those views. Shouting “identity” and “authenticity” is not a “Get Out of Moral Assessment” free card. It doesn’t seem that leftists feel any shame about condemning my beliefs even if they derive from my authentic identity as a theologically orthodox Christ-follower.

“LGB” and “T” activists are far from done with their unholy work of transforming a once decent place to raise children into a moral sinkhole in which the government will soon appropriate children whose parents don’t toe the line drawn by regressive pagans.

I have long contended that there is no greater threat to First Amendment religious free exercise and speech protections than homosexual and “trans”-cultic activism. If Harris and Biden win the White House, and Democrats win the U.S. Senate, fasten your seatbelts, Christian conservatives, because it will be a bumpy night.

We are committed to upholding truth while resisting and opposing the rising wave of delusional thinking and tyrannical laws/mandates that have afflicted our state and nation. IFA will continue to provide our supporters with timely alerts, video reports, podcasts, pastors’ breakfasts, special forums, worldview conferences, and thought-provoking commentaries—content that is increasingly hard to find.