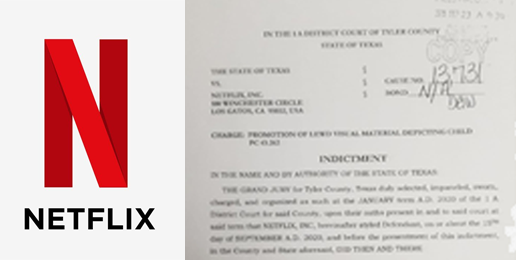 Netflix Has Been Indicted in Texas on Child Pornography Charges for Promoting “Cuties”
10.08.20
PRINT

Netflix, after facing intense public backlash for airing the provocative film “Cuties,” which many saw as sexualizing children, is now facing criminal charges in the state of Texas.

State Representative Matt Schaefer (R-TX) made public a grand jury indictment that has been filed in Tyler County, alleging Netflix is guilty of promoting “lewd visual material depicting a child.”

Netflix, Inc. indicted by grand jury in Tyler Co., Tx for promoting material in Cuties film which depicts lewd exhibition of pubic area of a clothed or partially clothed child who was younger than 18 yrs of age which appeals to the prurient interest in sex #Cuties #txlege pic.twitter.com/UJ1hY8XJ2l

According to the indictment, Netflix “knowingly” promoted “visual material which depicts…the genitals or pubic area of a clothed or partially clothed child who was younger than 18 years of age at the time the visual material was created.”

Concurrent with Texas action, multiple lawmakers of both parties in Washington, D.C., called on the Justice Department to criminally investigate Netflix for the same offense of dabbling in the promotion of child pornography.

Additionally, there has been fear among those who work to rescue sex trafficked children that “Cuties” depicts the grooming behavior consistent with child predation.

“We’ve had 245 recoveries,” Joseph Travers, the founder of the child rescue organization Saved in America, told Breitbart News Daily, “meaning we have 245 case studies and one of the things we found out [is that there are] five steps of a predator’s grooming of children for child sex trafficking. … Out of the five steps, four of the steps are right in that Netflix film on how to groom a child for trafficking.”

Netflix has continued to defend itself throughout the ordeal, claiming the film was meant to show “the pressure young girls face on social media and from society more generally growing up.”