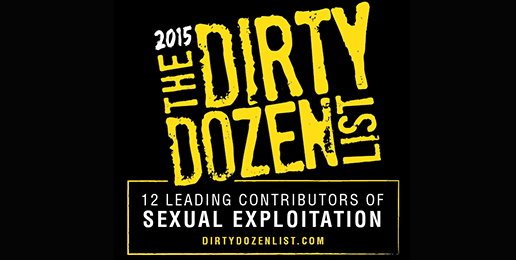 “The Dirty Dozen List has led to sweeping policy changes for past targets, including Google, Verizon, and Department of Defense.” said Dawn Hawkins, executive director of the National Center on Sexual Exploitation and MIM. “Despite the incontrovertible evidence of harm, many companies and organizations still choose to engage in sexual exploitation to make a profit or push an agenda,” Hawkins said.

Among others, the latest List includes Backpage.com, which garners 80 percent of all prostitution advertising dollars, CKE Restaurants for its sexualized hamburger commercials and print ads for its Carl’s Jr. and Hardee’s chains, and Fifty Shades of Grey for its glamorization of sexual violence. American Apparel is on the list, as they deserve to be, because of their ads depicting young women engaged in sexual acts. While we have indications that they are ready to change, pornographic ads are still posted on the company’s website.

Topping the list is the Department of Justice, which continues to disregard federal laws prohibiting distribution of hardcore pornography. “Hardcore pornography is fueling the demand for trafficked women and children and for child sexual abuse. To not uphold federal obscenity laws is to ignore what has now become a public health crisis in our nation,” said Hawkins.

For more information on this campaign, visit: http://www.DirtyDozenList.com

U.S. Department of Justice – The DOJ refuses to enforce existing federal obscenity laws against pornography despite the fact that these laws have been upheld by U.S. Courts and previously enforced. Pornography is a public health crisis and DOJ must not be on the side of pornographers.

Fifty Shades of Grey– This bestselling series and film glamorize and legitimate violence against women through sexual violence, abuse of power, female inequality, and coercion. Help us inform mainstream pop culture and news outlets that are promoting the material and the abusive lifestyle it promotes.

Hilton Hotels – This top hotel chain provides hardcore pornography movie choices with themes that include: children, incest, rape, sexual slavery, and extreme violence. Other popular hotels, such as Marriott and Omni, refuse to profit from this exploitation.

American Library Association – For years, ALA has encouraged public libraries to keep all computers unfiltered and to allow patrons, including children, access to pornography. As a result, child sexual abuse, sexual assault, exhibitionism, stalking and other lewd behavior takes place in libraries across the country.

American Apparel – American Apparel’s advertising strategy is to normalize the objectification of women. To sell products, the company regularly features nude or provocatively posed young girls with an emphasis on women’s breasts and buttocks.

Sex Week – University campuses are overwhelmed with reports of sexual violence, yet many of these schools welcome so-called “sex week” celebrations where pornography, violent sexual practices and the hook-up culture are promoted as harmless fun.

Facebook – In recent years, Facebook has taken measures to curb exploitation, but they have a long way to go as the world’s most popular social networking site. It has become a top place to trade pornography and child pornography, as well as a place of prostitution and sex trafficking.

CKE Restaurants – Owner of over 3,300 Carl’s Jr. and Hardee’s locations, CKE Restaurants utilizes sexual suggestions and explicit images of the female body in commercials and print ads to sell hamburgers.