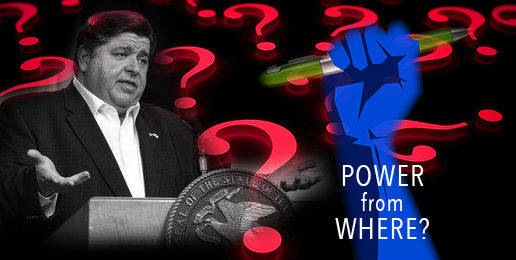 Where Does the Governor Get the Authority to Shut Down the State?
05.21.20
PRINT

Governor J. B. Pritzker and the Illinois Department of Public Health (IDPH) are not above the Illinois Constitution because of a declared emergency.

The Illinois General Assembly cannot by way of a state statute lawfully grant the governor additional through an emergency powers act. To do so violates the Illinois State Constitution, and enacting law that runs contrary to the Illinois Constitution makes that law null and void.

The governor seems to believe that because he was elected, he has an intrinsic right to do what he wants regardless of what power the Illinois Constitution delegates to him. Only citizens possess intrinsic rights, and those rights are constitutionally protected from government abuse. Governments only have constitutionally granted power and authority, not unalienable rights. There exists no constitutional authority for the governor to unilaterally mandate stay-at-home mandates and closures of so-called non-essential businesses–including churches–because of an alleged emergency.

Let’s hope law enforcement remembers that they swore an oath to uphold the constitution–not to be a personal army for the governor.