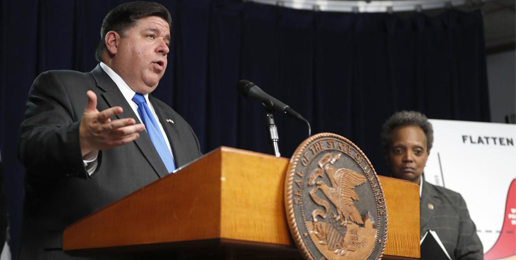 In the midst of the COVID-19 craziness, it is alarming to recognize there are many who are willing to use our current health crisis for their own gain and/or agenda. As these snollygosters and media types grandstand, I cannot help but think of Rahm Emanuel’s infamous quote, “never let a crisis go to waste.”

Ironically, Emanuel first used that phrase in 2008 during the nation’s financial crash and then again last week in response to our nation’s coronavirus emergency. Is it a repackaging of one of Saul Alinsky’s Rules for Radicals, in which he writes “in the arena of action a threat or a crisis becomes almost a precondition to communication”? I’ll let you decide.

The truth is, the board and staff here at IFI are deeply disturbed to hear the incessant petty partisan criticisms of the Trump Administration by political leaders and media pundits who only seem interested in stoking anxiety and exacerbating division among the American people. In that regard, Illinois’ Governor JB Pritzker has made a name for himself as one of the nation’s chief nitpickers over the last several weeks.

In his first fourteen months as CEO of the state of Illinois, Gov. Pritzker hasn’t pursued policy solutions that would have helped Illinois prepare for a pandemic. Gov. Pritzker hasn’t tried to bolster Illinois’ rainy-day fund, which is now vitally needed to purchase respirators and other medical equipment. In fact, Illinois remains disadvantaged because of the billions of dollars in unpaid bills dragging us down. Instead, like a petulant child, Pritzker awaits bailouts from the federal government.

For the most part, Pritzker’s political priorities have concerned the “social issues.” Working with the “Progressive” Caucus in Springfield, he followed through on his pledge to “make Illinois the most progressive state in the nation” for killing babies through abortion. He helped pass the mandate to indoctrinate young children through teaching positively about “LGBT” history in government schools (K-12). He helped pass an expansion of gambling and increased both gasoline taxes and the cost of doing business with a hike in the minimum wage.

Pritzker’s involvement in getting recreational marijuana passed in the state cannot be over-emphasized. This foolish policy will only exacerbates our current national/international health predicament, as marijuana consumption has been proven to suppress the immune system, leaving users more vulnerable to sickness. He did a great disservice to Illinois’ families, the healthcare system and first responders. BTW, who do you suppose will be paying for these unintended consequences of legal pot? Regarding the “stay-at-home” order, which has now been extended through April 30th, why are abortuaries, liquor and pot stores considered “essential businesses”?

In all of this, Christians should not forget the centrality of prayer and worship to the only One who can heal our land of the myriad forms of suffering people are experiencing. We owe Jehovah-Rapha (i.e., the God who heals) all of our love and devotion (Psalm 41:3). It is imperative to acknowledge that “that the Most High is ruler over the realm of mankind …” and to recognize that He works in miraculous ways through doctors, nurses and medicine.

Let us not be like the insolent King Nebuchadnezzar who foolishly took credit for building up Babylon the Great. Instead, it is far wiser to humbly and with great lament seek God in worship, praying fervently for His merciful hand of healing and restoration (See Daniel 4:28-37).

Take ACTION: Click HERE to send a message to Gov. Pritzker to ask him respectfully to stop using this national crisis to divide the American people. Ask him to stop grandstanding and instead focus on responsible policies that will shore up our foundation. These priorities have been neglected for far too long, and it is past time that we address them instead of focusing on petty politics.