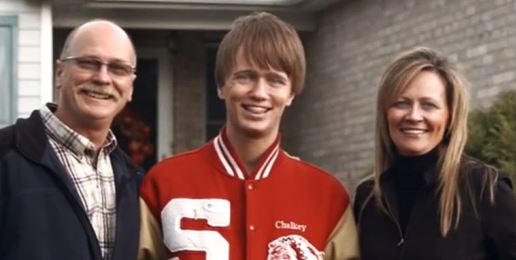 A Streator family — including their special needs son — are featured in a new video that shines a spotlight on combating fraud and abuse in state Medicaid and welfare programs.

Produced by the Foundation for Government Accountability, a free market think tank based in Naples, Fla., Gary and Christine Chalkey, along with their 19-year-old developmentally disabled son, Jacob, are interviewed in the video about how abuse in state subsidy systems robs scarce resources from the eligible and truly needy.

An FGA spokesman told The Times the production, entitled “Stop the Scam,” will be used as a marketing tool to inform policymakers to create a safety net for those who need it most and to promote immediate audits of the Medicaid and welfare rolls in all states.

According to its website — thefga.org — the FGA promotes better lives for individuals and families by equipping policymakers with strategies to replace failed health and welfare programs nationwide. As an organization, it demands integrity, honesty, perseverance and personal accountability.

Christine said the video should help get the word out about who she believes are the most vulnerable — those with Developmental Disabilities in Illinois — and how they are being cheated out of their mandated entitlements in the Medicaid program because of the hundred of thousands of people fraudulently enrolled in Medicaid.

She said an independent audit in Illinois Medicaid released last January showed more than 300,000 people were scamming taxpayers of more than $350 million dollars while taking the necessary funding away from the truly vulnerable.

The Chalkey couple has been advocating for Jacob’s rights since he was diagnosed at 6 months old. Jacob is the oldest of 19 people in the world with the life-threatening condition that causes debilitating seizures. Because of problems within Illinois’ Medicaid system, cuts were made that eliminated state financial assistance for Jake’s medications.

In the video, FGA representatives interviewed Christine, Jacob and state Rep. Patti Bellock, R-Hinsdale — not only about the fraud and abuse within Illinois’ Medicaid system — but also the frustration with programs that will not allow outside audits to allow them to be made accountable to state taxpayers.

“I have been fighting for over two years to bring attention to the Medicaid cuts that were made to the most vulnerable of all residents — those with developmental disabilities in Illinois, children and adults classified as medically fragile and technologically dependent,” said Christine. “Our government is mandated to provide some necessary life-sustaining medical care to children with rare disorders, which insurance would not cover.”

Christine explained, “In July of 2012, the state of Illinois stopped paying for the only medicine that would prevent Jacob from going into a life-threatening seizure. They also cut medically necessary services for over 5,000 other children. I spent weeks, frantically calling my insurance company, state agencies, local, state and congressional legislators, media and talk radio show to help us. Long story short, we had to try Jake on another medicine, which caused him to have a major reaction and seizure, temporarily losing his ability to walk and talk.

“The federal government provides medical help to the states for these rare cases. We worked with state Sen. Dan Kotowski, D-Park Ridge, who got the state to follow the federal law and got Jake back on the only medicine that helps control the seizure.

“Sen. Kotowski worked to help get name-brand seizure medicine covered in the Medicaid programs for the truly vulnerable like Jake. He also offered his assistance in helping Jake and the most vulnerable.”

Christine said, “I just want the truth to be heard and for the most vulnerable to get the mandated medical care they are entitled and need to survive to save taxpayers millions by removing the dead and illegal recipients. Historically, as our Medicaid system grows, it is always the most vulnerable who get cut first because they have no voice, no paid representatives or lobbying groups to help them. This video should help bring attention to the Medicaid cuts that were made against the most vulnerable of all residents.

“It is said that the test of a society is how it treats the fragile, or those who cannot help themselves. Well, then, I believe, Illinois is failing holding a bottom of the barrel national ranking serving those with developmental disabilities for decades now. Don’t you think it is time to for the state to, at least, get a passing grade for serving the vulnerable — those who government was truly intended and need?”