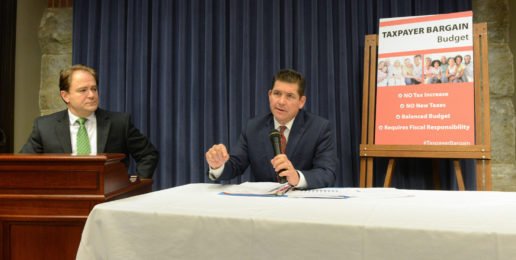 Senators McCarter and McConchie Provide a Sign of Life in the General Assembly
Written By John Biver   |   04.24.17
PRINT

There is little doubt that many Illinois citizens tune out their state’s political and governmental news because like any soap opera, the characters may change, but the basic drama remains the same. The plot hasn’t advanced much since Governor Bruce Rauner took office, so it’s easy to doze off when the news reports come on the radio.

The main soap opera in Illinois during the past few years has revolved around our lack of a state budget. Things were bad even with a budget, now without one they’re getting worse.

The Illinois governor is charged with a big task. The state’s constitution says that he “shall prepare and submit to the General Assembly … a State budget for the ensuing fiscal year” where the “[p]roposed expenditures shall not exceed funds estimated to be available for the fiscal year as shown in the budget.” In other words, a balanced budget. Rauner claims he has introduced a balanced budget, but experts readily admit the math proves him wrong.

Rauner isn’t the first guy to fail in this duty. We haven’t seen an Illinois governor introduce a balanced budget for a very long time — but at least they proposed a budget. That said, none of the previous governors ran on a platform of getting serious about cleaning up Illinois’ financial mess. Rauner did. We continue to hear about the “turn around agenda,” but evidently that turn around doesn’t begin with a balanced budget proposal.

There actually is good news out there among all the bad. Really, there is. Two no-tax-increase budgets have been introduced during this General Assembly session. The first was produced by the Illinois Policy Institute and announced in February. The details of it — and there are many — can be found by visiting their website.

The other no-tax-increase budget was recently introduced by state Senators Kyle McCarter (R-Vandalia) and Dan McConchie (R-Lake Zurich). So even though our Republican governor didn’t offer a balanced budget, at least two other elected Republicans have.

Senators McCarter and McConchie are calling their proposal a “Taxpayer Bargain.” No doubt the name is in answer to what has been called the “grand bargain” that has made headlines for months. Grand indeed, except for taxpayers, since tax increases are included.

Instead of a tax increase, the Taxpayer Bargain proposal calls for cuts in the state budget. Cuts are the key. As simple as that is, and as basic it is to any business or household, expenditures cannot exceed revenues for long. So regardless of all the cries from tax dollar eating bureaucracies, interest groups, and their allies in the media and the Democratic Party, cuts are not an option.

In fact, with the over-spending that has been going on at the state level for decades, to get to a genuinely balanced budget is not an easy task. It is going to take courage — and as important — a plan to market the proposal across the state.

State Senators Kyle McCarter and Dan McConchie’s are showing courage — and as result, a sign of life in the GOP senate caucus. Their budget, McCarter says, is “strong medicine for a very sick state.”

Listening to a politician talk is typically something people seek to avoid — but I would encourage readers to watch all or at least parts of the series of Facebook videos produced by Sen. McCarter. One by one he is goes through all the sections of the Taxpayer Bargain. And while he discusses some details that are deep in the weeds, over-all it is a good over-view for budget laymen to be introduced to the topic.

In those videos, Sen. McCarter is having a conversation with Illinois taxpayers — one that Rauner and the rest of the Republicans in the General Assembly should’ve started a very long time ago.

So why doesn’t Rauner just adopt the McCarter/McConchie or the IPI budget? Your guess is as good as mine. With a Democrat controlled legislature it probably is a good idea to start negotiations with what is close to an ideal budget. With the mess that this state is in, close to ideal means no tax increases. High taxes have been driving out businesses and taxpayers — and one of the more depressing news items of late is that Illinois tax revenues are actually down so far this year. So if things aren’t bad enough…it’s past time for this soap opera to be cancelled.

Here is the title and headings (as bullet points) provided in a press release announcing the budget plan — note the unique concept of “Taxpayer respect”: