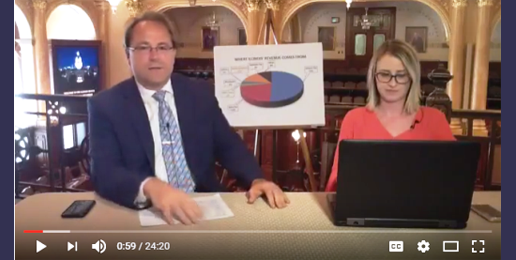 Two years after the “temporary” income tax expired, rapacious Springfield lawmakers are once again working toward raising our taxes, supposedly in order to solve the state’s fiscal problems. This time they want to raise the state’s income tax from 3.75 percent to 4.95 percent, raise the corporate tax from 5.25 percent to 7 percent and expand the state’s sales tax to include certain services.

In a partisan line vote, Illinois Senate Democrats passed these ridiculous proposals in SB 9 on Tuesday afternoon by a vote of 32-26.  Most of these lawmakers honestly believe that taking more money from citizens is the solution to the problem they created, instead of living within our means (which is $32+ billion annually).

SB 9 now moves on to the Illinois House.

Yet State Senator Dan McConchie (R-Hawthorn Woods) recently gave a Facebook Live video presentation about the state budget that showed exactly how simple the problem is, as well as how simple the solution is.

The temptation for many is to make this matter of elementary math — addition and subtraction — resemble the complex study of particle physics. Actually, one of the best parallels used to explain the state budget is to compare it to a family budget. If you continue to spend more than you take in you are in for trouble.

As Sen. McConchie points out early on in his presentation, Illinois has set a new U.S. record by not having a state budget for 23 months. While 90 percent of the spending is still happening, the rate of spending is unchecked to the point where the state is falling further into debt at the rate of $15 million dollars a day.

Here’s a simple question: how can 118 state representatives, 59 state senators, a governor and his administration still continue to spend more than we can afford — to the tune of $15 million dollars a day?

If that isn’t enough, our elected leaders have managed to accumulate $14.3 billion dollars in unpaid bills according to the Illinois Policy Institute.

For those interested in an overview of revenues and spending, Sen. McConchie used a few charts to lay out the details.

As you can see here, 51% of state revenues come via the income tax, 22% sales taxes, 12% Medicaid match by the federal government, and then a mix of other sources such as utility and cigarette taxes. 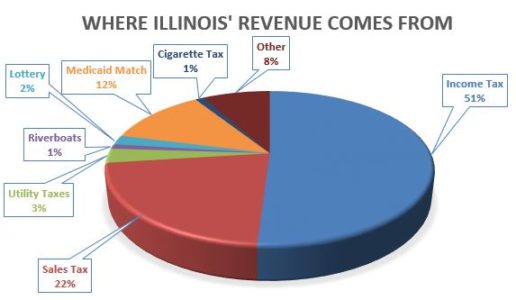 Sen. McConchie then showed where the money is being spent: 29% health care and family services, Medicaid, etc., 27% K-12 schools, 12% Department of Human Services, 8% higher ed, 5% Department of Corrections, and the other 19% is spread around other state agencies. 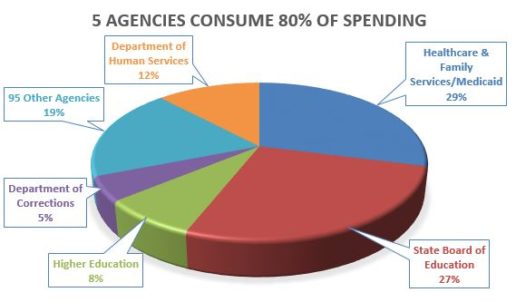 Sen. McConchie explained that negotiations continue in Springfield, but unfortunately they began with a discussion about raising taxes, not cutting spending. Sen. McConchie noted that the budget proposal presented by him and Sen. Kyle McCarter (R-Lebanon) focused on showing how the state could live within its means by cutting spending. Their “Taxpayers Bargain” budget does not contain any tax increases.

Also on the table is a massive expansion of gambling, which the Illinois Family Institute has shown to be a boondoggle every time it takes place.

Sen. McConchie did say that there are some good things happening, such as local government consolidation, procurement reform, and workers compensation reform.

Again, it is simple, just like basic math. The problem is a lack of leadership and courage to take on what is, at its core, a political problem:

The forces arrayed in support of spending are organized and well-funded and as a result, they practically own (through campaign contributions) most members of the General Assembly. Illinoisans calling for spending cuts are out-gunned despite the fact that they are not outnumbered. There are far more families and businesses suffering under an already heavy tax burden than there are beneficiaries of tax dollars.

That is also simple math: Illinois is losing population and businesses to other states because of its high tax burden.

Therefore, solving that political problem mentioned above is merely a matter of educating and activating enough of the taxpayers so their voices are heard above the din of the tax-eaters.

Bruce Rauner, who began campaigning for governor in 2013, has had four years to use his considerable wealth to do just that: educate and activate. His failure to do so is easily explained through the old but true statement: you can’t solve a problem with the same people who helped create it. Until Governor Rauner stops listening to the wrong people and starts listening to the right people, don’t expect to see any change. For the next year and a half we’ll just see the equivalent of more duct tape commercials paid for by a guy who likes to wear a gimmicky shirt as U.S. Senator Lamar Alexander (R-TN) has done for years.

Take ACTION: Click HERE to tell your state senator and representative to stop expanding Illinois government “revenues” on the backs of hard working citizens and families.  Instead of raising taxes, Illinois leaders must cut wasteful spending and roll back the regulations and taxes that stand in the way of real, long term growth.

Ask your state lawmakers to vote against any legislative proposal that would increase any tax burden for Illinois citizens.

We’ll close with a third graph from Sen. McConchie showing that Illinois’ spending problems are nothing new. As bad as this looks, it gets even worse. The above numbers don’t include the pension liabilities created by government employee unions through excessively generous and unrealistic employee contracts. That, too, is a simple problem that can be fixed. But not without leadership and courage.

Making Illinois a place where people want to do business and can afford to raise a family will do more for the bottom line than increasing the tax burden on Illinois citizens.

Steve Rauschenberger: There is Too Little Interest in Addressing the State’s Budget Fundamentals
b
a
x
r