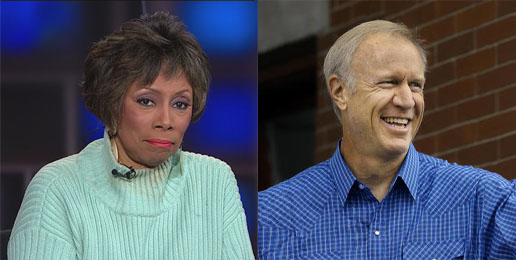 Yesterday, I wrote about the profoundly unjust decision of the ideologically imbalanced three-member panel of commissioners from the Illinois Human Rights Commission who decided that Christian bed and breakfast owner Jim Walder should pay $80,000 for refusing to rent his facilities to a same-sex couple for their civil union ceremony.

In that article, I questioned both the lack of ideological representation on the panel, which included two homosexual activists and no conservatives, as well as on the full 13-member commission. I questioned whether the commission is skirting the law that prohibits more than 7 members of the same political party from serving on the commission by identifying 2 of its members as Independents when in reality they are Democrats.

There are yet more questions about the political composition of the Illinois Human Rights Commission, this time about Commissioner Hermene Hartman who is identified as one of the five Republicans serving on the 13-member commission.

Hartman is the publisher of Chicago “lifestyle publication” N’DIGO.com. Her bio on Huffington Post describes Hartman as “one of the most significant and influential Black women in American publishing….N’DIGO, was founded in 1989, as a weekly lifestyle publication for progressive readers.”

Hartman was a Democrat until Bruce Rauner ran for governor and began disbursing money in the black community, which included, according to the Chicago Tribune, paying Hartman “$10,000 per month for her outreach efforts.”

Interesting fiscal tidbit: The Better Government Association (BGA) reports that “Commissioners devoted an average 12.9 hours per month to official state business for the fiscal year 2011.” That comes out to approximately $322 per hour—on average.

Hartman endorsed Hillary Clinton in the recent election. Maybe Hartman has converted back to the Democratic Party. If “Independents” Terry Cosgrove (a homosexual activist and pro-feticide fanatic) and Patricia Bakalis Yadgir, and “Republican” Hermene Hartman are all, in reality, Democrats, the Illinois Human Rights Commission is in violation of state law that limits the number of commissioners from the same political party to 7.

My math-challenged pea brain thinks there may be up to 9 Democrats serving on the commission that will decide whether to subordinate constitutionally protected religious liberty to homoerotic privilege.

If you haven’t let Govenor Rauner’s office know what you think of this feckless ruling and the corrupt IHRC, please do so now.

Take ACTION:  Please click HERE to contact Governor Rauner to express your opposition to his appointments of Democrats Hermene Hartman and homosexual activists Duke Alden and to urge him to investigate the Illinois Human Rights Commission’s efforts to circumvent the law prohibiting political imbalance on the Commission.