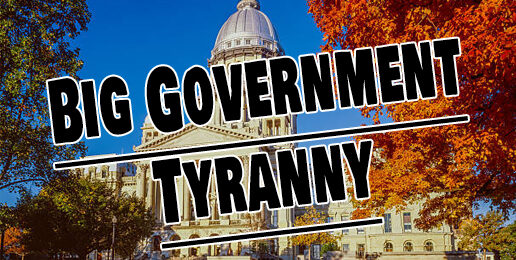 I know we shouldn’t be surprised. We know intuitively and intellectually that the nature of Big Government is tyranny. Yet I was stunned to watch Illinois Democratic State Lawmakers intentionally and aggressively pursue an agenda to diminish the civil rights of its people. Not only did they attack health care conscience rights protections, but they also repealed Illinois’ last major abortion regulation which ensured the rights of parents/guardians to be notified when their minor daughter seeks to have an abortion.

Thankfully, not one Republican state lawmaker voted for these tyrannical proposals.

The second half of the 2021 Veto Session started on Tuesday where the Illinois Senate Executive Committee heard testimony on HB 370, the legislation to repeal the Parental Notice of Abortion Act. A few hours later, it was sent to the Illinois Senate floor, debated and then passed by a vote of 32-22, with 5 senators not voting.

Myles Holmes, IFI Board member and pastor of Revive Church in Collinsville emphatically points out that

“government is not God and has no right to usurp the place of parents in the instruction and direction of their children’s lives. The passage of this onerous bill demonstrates the Marxist control that Democrats want over our families. The first response of Christian families must be to remove their children from government control in the public schools, and the second  is to work hard to remove these politicians in the next election.”

Governor JB Pritzker is expected to sign it into law. According to an article in the Chicago Sun-Times, Pritzker “vowed” to sign the bill saying, “At a time when reproductive rights are under attack across the country, Illinois is protecting those critical reproductive rights.” The article does not explain that reproductive “rights” is literally license to kill pre-born human beings.

Immediately preceding their vote to usurp parental rights, the Illinois House of Representative decided to quash conscience rights when they took up and debated SB 1169. This bill diminishes the Illinois Health Care Right of Conscience Act — specifically for COVID-19 remediation. In other words, the sponsors of this amendment intends to curtail the safeguard that existed in state law that allowed citizens to refuse the COVID-19 vaccine mandate. The bill passed the Illinois House by a vote a 64-52 with 2 voting present. UPDATE: Late Thursday night (10/28/2021), the Illinois Senate concurred with the Illinois House and passed this bill by a vote of 31-24.

The chief sponsor of this legislator, State Representatives Robyn Gabel (D-Evanston), repeatedly argued that the original intent of the Illinois Health Care Right of Conscience Act was about abortion, birth control and sterilization and was crafted to protect healthcare professionals. In other words, it was not intended to protect people who want to avoid experimental and/or dubious medical treatments and/or the unmerciful despotism of vaccine mandates.

But the fact is, many who oppose being forced to take the COVID vaccine against their will firmly believe, as do we, that the Health Care Right of Conscience Act protects all citizens. You can read it for yourself.

(745 ILCS 70/5) (from Ch. 111 1/2, par. 5305)
Sec. 5. Discrimination. It shall be unlawful for any person, public or private institution, or public official to discriminate against any person in any manner, including but not limited to, licensing, hiring, promotion, transfer, staff appointment, hospital, managed care entity, or any other privileges, because of such person’s conscientious refusal to receive, obtain, accept, perform, assist, counsel, suggest, recommend, refer or participate in any way in any particular form of health care services contrary to his or her conscience.
(Source: P.A. 90-246, eff. 1-1-98.)

You can watch and/or listen to the debate here below:

Calvin Lindstrom, IFA board member and pastor of Church of Christian Liberty in Arlington Heights, is disgusted with Illinois politics, saying:

I hate to say this, but Illinois is a failed state in terms of political government. We have been dealing with a governor who for over 18 months passes executive orders with very little challenge from other elected officials. On these important matters the legislative branch is useless. And then unfortunately when the legislative branch does decide to pass legislation it follows an agenda rather than listening to the citizens of this state. There was no grass roots movement among citizens of Illinois to remove parental notification when a minor seeks to obtain an abortion. And in the face of massive opposition to changing the law over rights of conscience with respect to health care, our lawmakers again follow an agenda with no real concern for the voices of citizens.

I can speak personally to this when I met my own state representative, Mark Walker, in the state capitol building on Tuesday. I tried to engage him in conversation on Parental Notification for Abortion. I asked him his position and he said something like, “It’s an obvious choice.” I asked, what does that mean. He responded by saying, he was voting for repeal for the safety of women. He then walked off in a very rude manner. Perhaps he had somewhere to go, but his dismissive manner was not appreciated.

This is not a time for weakness or capitulation even though we are sorrowful, frustrated, and righteously angry. The psalm our church is using for this week, Psalm 68, is a good prayer for God’s people to follow. “Let God arise, Let His enemies be scattered; Let those also who hate Him flee before Him.” (Psalm 68:1).

Both of these bills will soon be sent to the Governor’s office for his consideration. While he has publicly declared his support for these feckless bills, you may want to call his office to let him know that many Illinois residents oppose the eradication of the parental notice statute and the amendment to our conscience rights protection law. His phone number in Springfield is (217) 782-6830. His phone number in Chicago is (312) 814-2121.