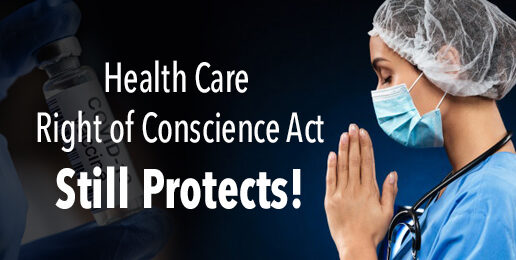 With the passage of Senate Bill 1169 (SB 1169), Governor JB Pritzker and his cronies have attempted to usurp the exclusive power of the judicial branch of government.

The General Assembly finds and declares that people and organizations hold different beliefs about whether certain health care services are morally acceptable. It is the public policy of the State of Illinois to respect and protect the right of conscience of all persons who refuse to obtain, receive or accept, or who are engaged in, the delivery of, arrangement for, or payment of health care services and medical care whether acting individually, corporately, or in association with other persons; and to prohibit all forms of discrimination.

The HCRCA prohibits any discrimination against those refusing to receive health care services that are contrary to his or her conscience. It states as follows:

It shall be unlawful for any person, public or private institution, or public official to discriminate against any person in any manner, including but not limited to, licensing, hiring, promotion, transfer, staff appointment, hospital, managed care entity, or any other privileges, because of such person’s conscientious refusal to receive, obtain, accept, perform, assist, counsel, suggest, recommend, refer or participate in any way in any particular form of health care services contrary to his or her conscience.

Discrimination by employers or institutions is specifically prohibited again in another part of the act:

It shall be unlawful for any public or private employer, entity, agency, institution, official or person, including but not limited to, a medical, nursing or other medical training institution, to deny admission because of, to place any reference in its application form concerning, to orally question about, to impose any burdens in terms or conditions of employment on, or to otherwise discriminate against, any applicant, in terms of employment, admission to or participation in any programs for which the applicant is eligible, or to discriminate in relation thereto, in any other manner, on account of the applicant’s refusal to receive, obtain, accept, perform, counsel, suggest, recommend, refer, assist or participate in any way in any forms of health care services contrary to his or her conscience.

Now, let’s turn to why the HCRCA has been put in the spotlight. Governor Pritzker, who has been attempting to rule the State of Illinois by executive fiat since the spring of 2020 under the guise of COVID-19 mitigation measures, has been recently losing in court.

The governor’s “mandate” that employers require vaccination or testing of all employees has been enforced voluntarily by many public and private employers, despite there being nothing in Illinois law to provide for enforcement of these executive orders. As a result, the HCRCA has been successfully used to obtain restraining orders against those mandating COVID-19 related mRNA injections and testing for COVID-19, without exemption for those who object to receiving that health care based on their moral beliefs.

All Illinois laws that require other vaccines provide for exemptions based either on religion or on proving that you have natural immunity from already contracting whatever disease the inoculation is intended to prevent. Pritzker’s “mandates” are different, because there are no exemptions provided for in state law when an employer requires you to receive a COVID-19 shot, and never has there been a requirement that otherwise healthy people receive a test for a disease that they have no suspicion of having in order to coerce someone to receive an unwanted vaccine. For those reasons, the HCRCA’s protections have been the last line of defense against these tyrannical mandates.

That’s why the governor, through his cronies in the legislature, tried to rush through SB 1169 during the fall veto session. In less than 24 hours, from October 25-26, the first (HFA 2) amendment to the original shell bill, which is similar to what was ultimately passed, received over 50,000 witness slips in opposition.

On October 27, the bill was amended again by Illinois House Floor Amendment 3 with no substantive changes, likely so that it could be sent to the Illinois Senate to concur without having all those opposing witness slips attached. Constituents took notice of this maneuver, and within only a couple of hours filed tens of thousands of witness slips in opposition to SB 1129 as amended by HFA 3.

It is not a violation of this Act for any person or public official, or for any public or private association, agency, corporation, entity, institution, or employer, to take any measures or impose any requirements, including, but not limited to, any measures or requirements that involve provision of services by a physician or health care personnel, intended to prevent contraction or transmission of COVID-19 or any pathogens that result in COVID-19 or any of its subsequent iterations. It is not a violation of this Act to enforce such measures or requirements. This Section is a declaration of existing law and shall not be construed as a new enactment. Accordingly, this Section shall apply to all actions commenced or pending on or after the effective date of this amendatory Act of the 102nd General Assembly. Nothing in this Section is intended to affect any right or remedy under federal law.

It may not be readily apparent what the governor is trying to do here. It might appear that through this bill, the legislature was amending the HCRCA to carve out an exception that would remove its protection of people’s right to object based on their conscience to unwanted health care related to COVID-19.

However, that’s not what the legislature did here. By including in the bill the sentence, “This Section is a declaration of existing law and shall not be construed as a new enactment,” this renders what would otherwise be an exception for COVID-19 nothing more than a resolution and statement from this general assembly of what they believe was the intent of the previous legislature that enacted the Health Care Right of Conscience Act and its other amendments. Resolutions are merely statements of opinion. They aren’t amendments, and they certainly don’t change the law.

The absurdity of this is astounding. The legislature here has said that they believe that the HCRCA, which states that “[i]t is the public policy of the State of Illinois to respect and protect the right of conscience of all persons who refuse to obtain, receive or accept … health care services and medical care … and to prohibit all forms of discrimination,” meant to say something like “except if it relates in any way to COVID-19.” Not only is this absurd and contrary to the plain language and ordinary meaning of the HCRCA, but also this is an unconstitutional attempt of the legislature to take on the role of the judiciary by interpreting what the intent of the HCRCA is.

In Illinois House and Illinois Senate debates when Republicans argued for the preservation of Illinoisans’ rights and of the HCRCS, Democrats and the Office of the Attorney General admitted that this bill came from the Governor. They admitted that the Attorney General needed his legislation to pass to help him in his fight against the people of Illinois using the HCRCA to protect their natural, God-given right to refuse health care based on their conscience.

What they didn’t admit, is that Senate Bill 1169 was meant to confuse the people of Illinois and coerce them into complying with mandates that they have no legal obligation to follow. The Illinois constitution prevents the Illinois legislature from interpreting the intent of the HCRCA. Only the courts have the power to interpret statutes and Illinois courts have given every indication that they believe the intent of the HCRCA was to protect all people in Illinois from receiving health care in violation of their conscience.

The Health Care Right of Conscience Act still protects your right to refuse COVID-19 related health care based on your conscience.

Austin Scott Davies is an attorney and founder of Midwest Legal Care , former prosecutor, and an active member of the Winnebago County Republican Party. He is also a board member for Concerned Citizens for America, a local chapter of Illinois Family Institute.

Public Education is Making Our Children Illiterate
b
a
x
r