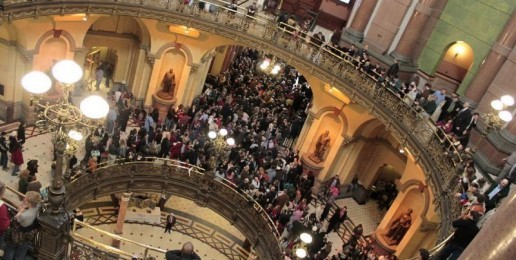 Senator Maloney has heard your concerns and has tabled the bill which means it’s dead for the session!

Take ACTION: Click HERE to contact Senator Maloney to thank him for hearing your concerns. You can also call his district office at 773-881-4180.

In a show of strength, an estimated 4000 homeschoolers descended on the Illinois Capitol Tuesday morning to demonstrate their opposition to SB 136, the proposal to mandate the registration of homeschool students with state bureaucrats.

During the Senate Education Committee hearing on the matter, proponents of the bill made it abundantly clear that registration isn’t all they were interested in. During testimony, downstate Truancy Officer Bill Reynolds told the committee that he wanted to “help” homeschoolers in his area, but didn’t necessarily know where to find them. This reminded me of Ronald Reagan’s words: “The nine most terrifying words in the English language are: ‘I’m from the government and I’m here to help.'”

And at various points during the hearing, both Senators Kimberly Lightford (D-Chicago) and Iris Martinez (D-Chicago) wondered what role government should have in trying to help those homeschooling students who were “falling through the cracks.” Apparently they failed to see the irony in requiring homeschooling parents to register their children in a system that has allowed scores of students to fall through the cracks for decades.

An email from Illinois Christian Home Educators (ICHE) pointed out:

One of the more alarming comments from the committee came from Senator Lightford, who wondered about homeschool teacher qualification and certification, which reveals the true intent of some government employees and points to the inevitable “slippery slope from registration to regulation” that IFI’s Laurie Higgins wrote about in her original article about this ominous bill.

If you are not convinced, please consider this exchange between Committee Member Senator David Luechtefeld (R-Okawville) and Truancy Officer Bill Reynolds:

Senator Luechtefeld: “If they register – will you go to any house and see if you can help?”

Senator Luechtefeld: “Even those that are doing a really good job?”

Truancy Officer: “That’s right. And I’ll know very quickly as I knock on the door; the ones that are doing a great job won’t let me go. They’ll want me to come in. The ones that say we don’t want you around I’ll know to take further action.”

Senator Luechtefeld: “I still don’t see how this changes things just because they register.”

Truancy Officer: “It gives me the name and opportunity.”

In other words, Mr. Reynolds is admitting that this bill is a solution looking for a problem! This bill will give him job security as he and other Truancy Officers harass homeschooling families and demand proof of academic success. So much for innocent until proven guilty. This is a standard not even required of public school teachers and administrators. IFI lobbyist Ralph Rivera pointed out the fact that existing truancy laws are adequate and that homeschoolers are accountable to them.

Opponents of this bill, including attorney Scott Woodruff from HSLDA, pointed out that this bill will turn peaceful, ordinary citizens “into political activists” — a fact driven home by a packed hearing room that overflowed into the hallways of the second and third floors. While waiting for the hearing to start, the crowd in the hallways began to sing. Strains of “America the Beautiful,” “God Bless America,” “Amazing Grace,” and “The Star-Spangled Banner” drifted into the committee room. This huge, orderly, and deeply passionate crowd singing beautifully made a powerful statement and played an invaluable part in seeing SB 136 defeated so quickly.

National Anthem in the halls of the Capitol

For Our Children’s Sake (Part I)