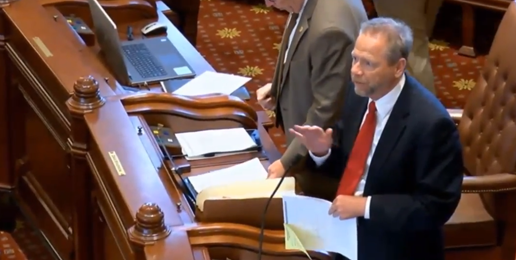 You must watch 8 gut-busting minutes of one floor “debate” that took place recently in the Springfield swamp. Then when you’ve caught your breath and dried those tears of laughter, take a moment to dash off a thank you to State Senator Dale Righter (R-Mattoon) for his exasperated and exquisite exposure of yet another exasperating and chuckleheaded bill sponsored and unfortunately passed by Springfield clowns.

The bill (HB 3394) amends the Business Corporation Act of 1983 in such a way as to try to force corporations to judge people by the color of their skin—or rather by the color of skin they wish they had—rather than the content of their character or their skills. HB 3394 blathers on about requiring publicly held domestic or foreign corporations with their principle executive offices located in Illinois to submit annual reports to the secretary of state identifying, among other things, the “self-identified” race, ethnicity, and “gender” of their board members.

Don’t look now, you pesky and peevish “trans”-cultists, but your incoherence is showing.

So, let’s look at what could happen if Governor JB Pritzker signs into law this silly, anti-business bill that seeks to force corporations to diversify their boards by using the self-identification of board members as black or female, rather than their objective race or sex: A 12-member racially colorless board that includes three white men who identify as black and Rachel Dolezal would be considered racially diverse, and a 12-member board of all biological males, six of whom “identify” as women, would be deemed sexually diverse.

So as not to spoil your fun, I’ll provide just a teaser from the video in which Senator Righter makes intellectual mincemeat of the legislative nonsense poor State Senator Christopher Belt (D-East St. Louis) was forced to defend:

Senator Righter: “[Amendment] subsection 4 regards members of the board who self-identify as a racial minority or ethnic minority. Now, I’m going to be completely honest with you. I didn’t know that you could self-identify as a member of a different ethnicity or race. So, my question for you is, in the instance where there is a corporate board that is all Caucasian, could half of them self-identify as minority and, therefore, receive a score as being diverse?”

You’re going to have to watch the remaining 6 minutes to find out how this debate played out. Grab some popcorn and enjoy the show.

Cultural regressives in Springfield better get with the “LGBTQQAP” agitprop. “Gender” no longer refers to biological sex—or so, we’re told. Gender now refers to the arbitrary, socially constructed and imposed norms, roles, behaviors, and conventions associated with maleness and femaleness. So, demanding diverse “gender” representation means exactly what?