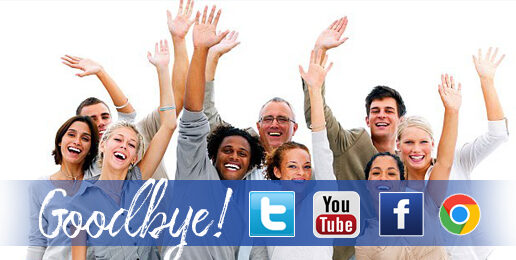 I am finally doing it: creating profiles on social media platforms that are friendlier to conservative points of view and that do not censor speech. This month I also installed Brave as my new web browser, ditching Google Chrome and Microsoft Edge, and I am very happy with the change.

Why am I motivated to make these changes now? Like so many others, I have had enough of the interference, outright censorship, suppression of conservative views, and suspension of accounts (which some people refer to as “Facebook Jail”). I am fed up with the unwelcome disclaimers by social media giants and partisan search engines that suggest my opinions and news posts are untrustworthy and/or dishonest. For these reasons, I have decided to say “goodbye” to liberal social media platforms.

Those who work behind the scenes at Facebook have admitted that they use algorithms to push religious–particularly conservative–content to the bottom of the pile, thereby rendering it effectively worthless on their platform.

Not only have the despots at Twitter had the gall to flag the tweets of President Donald J. Trump, we have also seen them suspend the New York Post’s account for posting an alarming story about the contents found on Hunter Biden’s laptop computer just before the election, thereby affecting the election.

On this topic, our friend, Dave Olsson, pointed out in a post on his blog how Google manipulated search results leading up to the presidential election. He quotes The Epoch Times which reported that:

Google shifted a “bare minimum” of six million votes in the Nov. 3 presidential election by pushing its political agenda onto its users, a research psychologist has claimed.

In an interview with Fox News’ “Tucker Carlson Tonight,” Dr. Robert Epstein, a senior research psychologist at the American Institute for Behavioral Research and Technology in California, suggested that the big tech company’s search manipulation could have prompted millions of Americans to shift their votes toward Democrats.

There is no doubt that Big Media and Big Tech not only operate from a left-leaning social/political worldview but also that they are activists for Leftist causes, promoting anti-family, anti-freedom narratives while at the same time suppressing conservative news and opinions.

Over the past several years, Big Tech has dispensed with any pretense of neutrality. Those of us who have used social media platforms to get our messages out to a wider audience have seen how these tech giants have become emboldened to counter, flag, suspend, and censor our posts and content.

In the meantime, these same Big Tech Overlords are working hard to persuade and deceive our unsuspecting neighbors. We, the discerning public, have no means to flag or post a “fact check” to the misleading, deceitful, explicit, and disturbing content promulgated by Leftists. Their storylines go unmolested.

You might think that advertising runs the internet, but it is the behemoth of data behind the advertising curtain that generates the real profits. As we use and engage with websites and social media, we are being followed all the time: tracked through our phones, watches, tablets, cars, smart speakers, and a multitude of other gadgets, gizmos, and devices.

This profusion of collected data, public demographics as well as personal preferences, truly has generated billions of dollars for these tech companies, but at what price? 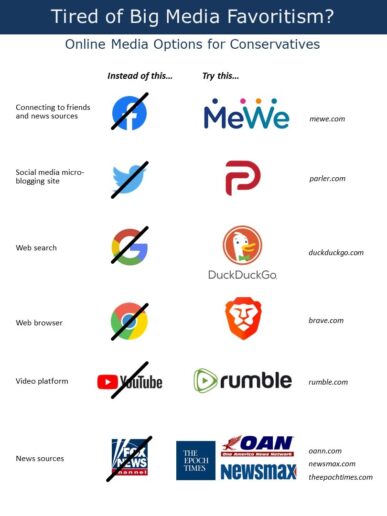 We shouldn’t. In fact, we must make a plan to migrate away from these exploitative platforms to freer alternatives.

If you have had enough of politically motivated bias and suppression, I encourage you to join me and thousands of other conservative activists in starting accounts at MeWe (instead of Facebook), Parler (instead of Twitter), and Rumble (instead of YouTube).

Instead of using Google Chrome or Microsoft Edge as your web browser, switch to Brave.

Rather than choosing Google, Bing or Yahoo as your Internet search engine, consider Duck, Duck Go, which does not track you, collect your IP address or personal information, or create any kind of personal profile about its users.

Abandoning these tech giants is a simple and practical way for conservatives to take action in the political arena. Information is power–the less you give, the less you empower those who oppose the values you espouse and defend.

To the best of my knowledge, these alternative platforms are safe and guaranteed not to interfere with our exercise of free speech. The following information regarding MeWe and Parler will help you understand the benefits of joining their platforms.

MeWe is a privately owned platform started by Mark Weinstein. You won’t find ads, spyware, algorithms, censorship, facial recognition, or fact checkers on MeWe. Unlike with Facebook, your personal data is not sold.

MeWe is a free platform but does offer an upgrade to MeWe Pro for a small monthly fee.

Parler is a privately owned platform started in 2018 by John Matze and Jared Thomson. They created the platform after becoming “exhausted with a lack of transparency in big tech [and] ideological suppression.”

Parleys are the Parler equivalent to tweets. While they can be longer than tweets, they are limited to 1,000 characters.

As with Twitter, Parler uses hashtags to broaden the reach of your content and ensure that your parleys will be seen.

The switchover to these new platforms will take some time, but I hope to have completed the migration and closed all of our Facebook and Twitter accounts by Memorial Day 2021. I encourage you to do the same. We should not allow Big Tech to stifle the dissemination of our conservative beliefs and online influence. Abandoning these large left-wing platforms is one practical way to do so.