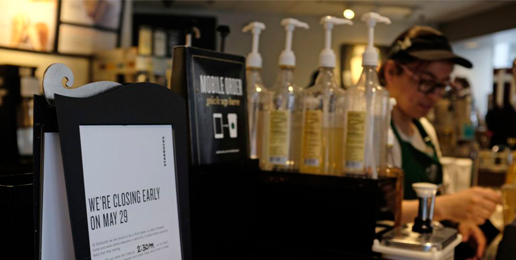 Starbucks and Its Unconscious Employees
Written By Laurie Higgins   |   05.30.18
PRINT

“No one who had once fallen into the hands of the Thought Police ever escaped in the end.
They were corpses waiting to be sent back to the grave.” ~ George Orwell, 1984

On Tuesday, there was a looong article in the Chicago Tribune’s business section on Starbucks “unconscious bias” training (which, unless Starbucks’ employees are unconscious, should probably be called “subconscious-bias training,” but—to borrow from millennials—whatever).

For those sub-rock dwellers among us, some background: Last month, one young white barista in Philadelphia told a black Starbucks visitor—who bought nothing—that he couldn’t use the restroom as per policies in some Starbucks’ stores. Subsequently, he and his friend—who also purchased nothing—were asked to leave and refused, after which the store manager called the police who arrested them. Calling the police seems an odd response since many people linger for hours doing work at Starbucks after buying one cup of overpriced coffee, but the response from the corporate office seems equally odd.

In addition to paying an undisclosed amount of money as a financial settlement to the two men who spent several hours in police custody and offering to pay for their college educations via an online program available to Starbucks employees, Starbucks management closed 8,000 stores at 2:00 p.m. on Tuesday in order to re-educate 175,000 employees on their “unconscious bias.” What this means is that re-educators will attempt to replace the bias of all 175,000 unconscious employees with a new set of biases.

The looong article recommends that bias “trainers… measure people’s understanding of the concepts before they start, so there is a baseline for measuring progress,” and that companies “bake parts of [the bias training] into performance reviews.”

One bias-training program sponsored by the Anti-Defamation League, even includes a written test. Gotta make sure all unconscious employees regurgitate back the RIGHT biases.

To be perfectly clear, I’m opposed to social injustice. Any stores that limited restroom-usage to those who bought something should have applied such policy equally to humans of color as well as colorless humans—well, except for colorful and colorless young mothers in the midst of toilet-training toddlers. They should have access to every restroom in the known universe.

This costly effort in virtue-signaling from the perpetually virtue-signaling Starbucks got me to cogitating. Since, according to Erin Thomas, head of a “diversity and inclusion strategy consulting firm in Chicago,” “everyone harbors” bias, I’m wondering if people of color harbor any biases against whites or if “progressives” harbor any biases against theologically orthodox Christians that undermine social justice, tolerance, unity, peace, and comity.