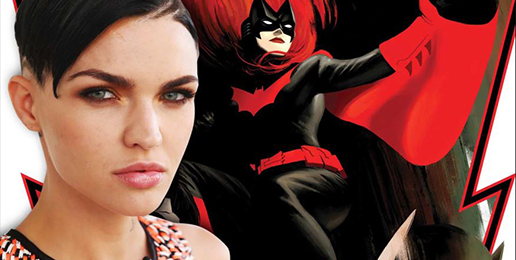 Fans of the dime-a-dozen televised superhero dramas may be in for some unfortunate news.  The actress tapped to play Batwoman in the latest installment of The CW’s seriate “Arrowverse” has been determined not to be gay enough for the role.  That is, the actress is gay, but she doesn’t prefer women enough – or enough to silence her critics, at least.

DC Comics re-established the character of Batwoman as a Jewish lesbian back in 2006, just before it became fashionable to recreate classic heroes as some mix of sexual minority X and racial minority Y.  To stay true to form, Australian actress Ruby Rose, an out lesbian, was cast to play the nocturnal crime-fighter.  Little did Rose know her Sapphic tastes wouldn’t cut the intersectional mustard.

Social media outrage over Rose’s casting pushed the blindsided actress into leaving Twitter.  The mob’s point of contention: Rose has a history of identifying as “gender-fluid,” not strictly lesbian.  What’s the difference?  Beats me; keeping up with the sexual dialectic of the left is like knowing the differences among regional Chinese dialects.

Rose’s final Twitter messages provide a clue as to the nature of the debate.  She reportedly wrote before kicking the platform: “Where on earth did ‘Ruby is not a lesbian therefore she can’t be batwoman’ come from – has to be the funniest most ridiculous thing I’ve ever read.  I came out at 12?  And have for the past 5 years had to deal with ‘she’s too gay’ how do y’all flip it like that?  I didn’t change.”

She didn’t change anything, indeed.  The pace at which the social-justice left has altered the terms of proper debate is dizzying.  Mere toleration of deviant lifestyles is not sufficient; now a new vocabulary must be employed with a surgeon’s precision.

Rose doesn’t meet the strict definition of a lesbian.  She’s also not Jewish.  Thus, she’s disbarred from playing a Jewish lesbian who dresses up like a humanoid bat to beat evildoers to a bruised and bloody pulp.

Surely, anything but the strictest adherence to the author’s original conception won’t do – except, of course, when it does.  The rumor that black actor Idris Elba could be playing the next James Bond was revived last week.  Ian Fleming, Bond’s creator, based his secret spy character off officers he knew in the Naval Intelligence Division.  It’s unlikely he pictured 007 as anything other than a martini-enjoying, woman-seducing white Scottish cove.

And yet, many of the same leftists who denounce the casting of Rose as Batwoman are cheering Bond’s sudden change in skin tone.  Liberal publications are encouraging the switch, singing hosannas to diversity.  “Every Argument Against Idris Elba Playing James Bond Is [BS],” squealed an angry mole at Esquire.

Back in 2014, Rush Limbaugh had the temerity to use the left’s racial casting logic against Elba, citing Fleming’s vision of the world-saving secret agent.  He was panned as a racist and bigot – not uncommon territory for the king of talk radio.

Two things can’t be true at the same time.  Ruby Rose can’t be unfit to don Batwoman’s leotard while Idris Elba can be right at home in James Bond’s patented tuxedo.

The matter is made worse by the stakes, which are extremely low.  Batwoman is a television show about a vigilante on a basic cable station.  We aren’t talking Macbeth at the Globe Theater.  To give over so much time and energy to perfect a depiction of Batman’s female alternative is an exercise in listlessness.  Basically: who really cares?

Does the left’s intersectional world have room for the concept of acting?  Clearly not.  What a painfully trite existence the race-and-sex-obsessed progressive must have.  It’s bad enough to have to look over your shoulder and check your vocabulary after every breath.  Not even to be comfortable with the simplest of forms of escapism because they don’t comport exactly with reality is a bore.

“I love acting.  It is so much more real than life,” said Lord Henry.  That sentiment is being taken quite literally by unimaginative leftists who care everything for sexual and racial politics and nothing for drama, or its more comprehensive title: life.

This article originally posted from Townhall.com.