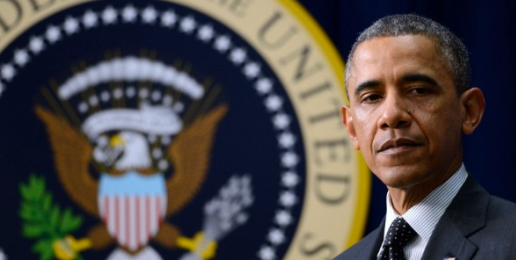 Shariah law evolves primarily from the Koran, a body of moral and religious laws dictating almost every aspect of Muslim life. Coming from the lips of Allah, they supposedly represent perfection and are incorruptible by man’s interpretation.

However, many verses of the Koran conflict with each other. This led Muslim clerics to adopt the concept of abrogation – giving later verses preference – lest Allah be deemed imperfect!

Application of shariah should concern any rational person for various reasons including intolerance for non-Muslims, brutal punishments for sinning Muslims and oppression of women.

Why has the media failed to query Obama on such aspects of Islamic law? Why specifically should Obama believe it repugnant to oppose such intolerance, brutality and inequality simply because it is packaged as a religion?

A recent poll of young (18-29) American adherents to Islam and its law reveals a startling 26 percent believe suicide bombings are justified against non-believers, with another 15 percent more lukewarm to the idea, believing justification is warranted only “often/sometimes.” In France, among the same age group, 42 percent believe it always justified and 19 percent often/sometimes justified.

Why has the media failed to query Obama on such numbers of young people justifying violence based on their religion while he sees no connection?

As we witness a world in turmoil-caused by millions of fleeing Middle East Muslim refugees, by ungrateful Muslim immigrants expecting host nations in Europe to tolerate their religious beliefs while they refuse to reciprocate, by Muslims murdering Muslims in Muslim lands, by the West repeatedly being targeted by Muslim terrorists – only to hear Obama declare Islam is peaceful, why does the media fail to query him on his belief?

A website monitoring the number of Islamic terrorist attacks taking place globally since 9/11 records more than 28,800 occurrences. These are not acts of “violent extremism” as Obama labels them; these are calculated acts of terrorism by Muslims seeking to kill apostates or infidels in the name of their religion.

Why has the media failed to query Obama on his refusal to distinguish between violent and Islamic extremism?

In June alone, 238 such Islamic terrorist acts were committed in 33 different countries. Another source reports since 9/11, a total of 89 Islamist terror attack plots have been uncovered in the U.S.

Why has the media failed to query Obama on his refusal to link terrorism and Islam to these plots?

Muslim leaders, such as Egyptian President Abdel-Fattah el-Sisi, have acknowledged Islam is not peaceful and in need of reform to accommodate a 21st century world. Obama has yet to support Sisi’s call for reform.

Why has the media failed to query Obama about Sisi’s call for a not-so-peaceful religion’s reformation?

Islamist threats have prompted Middle East states to start monitoring mosques in their countries (more than 3000 in Egypt and 20,000 in Saudi Arabia).

Why has the media failed to query Obama on why such monitoring is necessary if Islam is a peaceful religion?

Obama chastises our police officers for failing to acknowledge internal problems have caused deaths of black suspects during arrests.

Why has the media failed to query Obama on acknowledging his own problem – leading to far many more deaths – in refusing to recognize Islam’s violent side?

In addition to Obama, only one other American president has read the Koran. Having learned from Islam’s holy book and a Muslim ambassador in 1805 at the end of the first Barbary War that the Koran encouraged unprovoked attacks against non-Muslims, Thomas Jefferson sought funding to build a navy. His knowledge of the Koran’s mandate enabled the U.S. Navy to defeat the Muslim pirates in the second war.

Why has the media failed to query Obama on why he remains blind to Jefferson’s justified concerns about Islam’s aggressive mandate?

The Muslim Brotherhood, which declared war against America in 2010, has been embraced by Obama. This is in spite of its once-secret but still operational war plan to undermine U.S. laws by “civilization jihad,” forcing America’s submission to sharia. A 2015 poll indicates 51 percent of American Muslims seek to make this happen.

Why has the media failed to query Obama on the Brotherhood’s nefarious war plan – a president who instead of banning its leadership from the White House welcomes it? He continues to embrace it even as Congress considers legislation to join our allies in declaring it a terrorist organization.

In choosing a site to give his 2009 kumbaya speech concerning U.S. relations with the Muslim world, Obama selected Egypt’s al-Azhar University – the most influential Islamic learning center in the Sunni world. Al-Azhar endorses the centuries old “Conditions of Omar” as a mandate of the Koran by which non-Muslims are forced to convert to Islam, die or pay tribute. Astonishingly despite this Obama praised al-Azhar in his speech for carrying “the light of learning through so many centuries…”

Why has the media failed to query Obama on selecting a university of Islamic learning still adhering to non-Muslim intolerance?

Why has the media failed to demand Obama defend his position Islam is peaceful in the face of such overwhelming numbers revealing otherwise?

This article was originally posted at Accuracy in Media.