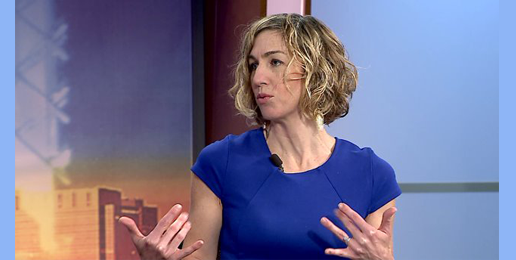 Chicago Tribune columnist, lifestyle expert, and purveyor of deep thoughts, Heidi Stevens, is taking singer Kelly Clarkson to task  for Clarkson’s admission that she spanks her children. Stevens makes her argument by use of an analogy (“Progressives” really need to work on that skill). Stevens wrote the following:

“Here’s where we play swap-the-person-getting-hit. Let’s say you’re talking to a friend, relative, neighbor, acquaintance from church — any grown-up, really — and you get on the topic of marriage. Let’s say you’re exchanging anecdotes about the ups and downs, the frustrations, the disagreements that occur when you’re sharing a home and a life with a spouse. And let’s say the grown-up tells you, “I just slap my wife when she’s really upsetting me.” Or, “When I really want to teach my husband a lesson, I hit him.” I would find a lot wrong with that. I think most of us would. No amount of domestic violence is socially acceptable. We frown on all of it. Why on earth should we accept a lower bar for children?… I’m frankly astounded that it’s not outlawed in the United States.”

How about we now play swap-the-consequence-for-misbehavior.

Let’s say you’re talking to any grown-up and you get on the topic of marriage. And let’s say the grown-up tells you, “I just put my wife in time-out when she’s really upsetting me. She must sit on a stool facing the wall until I tell her time-out is over. If she gets up before time-out is over, I physically return her to the stool.” Or, “when I really want to teach my wife a lesson, I take away her television privileges or prohibit her from leaving the house for two weeks other than to go to the grocery store or take the kids to school.” Or, “if my wife says something rude, I require her to apologize and give me a hug.  Then I draw up a behavior contract that establishes that further disrespect will result in the loss of her cell phone.”

I would find a lot wrong with that. I think most of us would. No amount of domestic oppression is socially acceptable. Why on earth should we accept a lower bar for children? I’m frankly astounded that time-out, grounding, compulsory apologies, and behavioral contracts are not outlawed in the United States.

It should be obvious that it’s silly at best to compare methods of discipline of children to modes of conduct between husbands and wives.

With faith-filled fervor, Stevens cited glowingly a 2016 meta-analysis of spanking research and solicited quotes from lead author Elizabeth  T. Gershoff who says that the “evidence against spanking is one of the most consistent findings in the field of psychology.” Curiously, Stevens doesn’t cite any criticism of Gershoff’s meta-analysis, like one appearing in Scientific American in which Melinda Wenner Moyer wrote this:

[A]lthough the new analysis did attempt to separate the effects of spanking from those of physical tactics that are considered harsher, research has shown that many parents who spank also use other forms of punishment—so “you’re still not really isolating spanking from overall abusiveness,” explains Christopher Ferguson, a psychologist at Stetson University in Florida. In other words, the negative effects associated with spanking could still be driven in part by parents’ use of other tactics.

The new analysis also did not completely overcome the lumping problem: It considered slapping and hitting children anywhere on the body as synonymous with spanking but these actions might have distinct effects. Some research also suggests that the effects of spanking differ depending on the reasons parents spank, how frequently they do so and how old children are at the time—so the conclusion from the meta-analysis that spanking itself is dangerous may be overly simplistic. “I think it’s irresponsible to make exclusive statements one way or another,” Ferguson says.

Finally, the associations reported in the meta-analysis between spanking and negative outcomes did not control for the potential mediating effects of other variables, which raises the chicken-or-egg question: Are kids spanked because they act out or do they act out because they are spanked—or both? (Even longitudinal studies don’t completely resolve this problem, because behavioral problems may worsen over time regardless of spanking’s effects.) To rule out the possibility that spanking is only associated with bad outcomes because poorly behaved kids are the ones getting spanked, researchers can use statistical methods to control for the influence of temperament and preexisting behavioral characteristics—but these methods are difficult to employ in meta-analyses, and the new analysis did not attempt such a feat. Ferguson did try to control for the effects of preexisting child behavior in a 2013 meta-analysis he published of the longitudinal studies on this issue; when he did, “spanking’s effects became trivial,” he says. As a further demonstration of the importance of careful statistical controls, Robert Larzelere, a psychologist at Oklahoma State University, and his colleagues reported in a 2010 study that grounding and psychotherapy are linked just as strongly to bad behavior as spanking is but that all the associations disappear with the use of careful statistical controls.

For those who have a tad more confidence in Scripture than in woefully unstable social science—which has become the ever-shifting bible of contemporary American culture—here are some words of wisdom from New Testament professor Walter Frederick Adeney who died at age 71 in 1920:

The primitive rigour of the Book of Proverbs is repudiated by modern manners…. people reject the old harsh methods, and endeavor to substitute milder means of correction. No doubt there was much that was more than rough, even brutal, in the discipline of our forefathers. The relation between father and child was too often lacking in sympathy through the undue exercise of parental authority, and society generally was hardened rather than purged by pitiless forms of punishment. But now the question is whether we are not erring towards the opposite extreme… and failing to let our children feel the need of some painful discipline. We idolize comfort, and we are in danger of thinking pain to be worse than sin. It may be well, therefore, to consider some of the disadvantages of neglecting the old-fashioned methods of chastisement.

A properly administered spanking (e.g., a swat on the bum) is neither an act of violence nor a beating, and children are not adults.