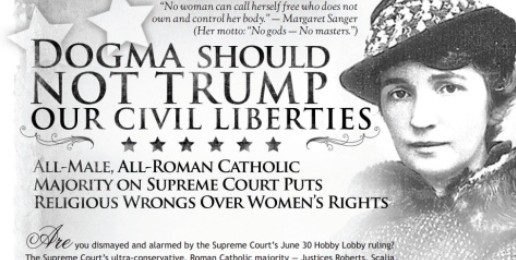 The New York Times is being criticized for having double standard by allowing a full-page ad by the Freedom from Religion Foundation (FFRF) against the Catholic Church in response to the Hobby Lobby decision, while the newspaper had rejected an “anti-Muslim” ad in 2012.

“Remember when the New York Times rejected an ad aimed at one religion?” asks journalist David Harsanyi of The Federalist on Twitter, with a link to the Think Progress blog post from 2012 that drew attention to how the newspaper “rejected a full-page anti-Islam advertisement submitted by anti-Muslim activists Pamela Geller and Robert Spencer.”

But on Thursday, the Times carried an FFRF ad denouncing “all-male, all-Roman Catholic majority” on the Supreme Court for its decision in the Hobby Lobby case.

The Times had responded to the “anti-Muslim” ad submission. And the Media Research Center quotes Geller as describing the newspaper’s response: “Bob Christie, Senior Vice President of Corporate Communications for the New York Times, just called me to advise me that they would be accepting my ad, but considering the situation on the ground in Afghanistan, now would not be a good time, as they did not want to inflame an already hot situation. They will be reconsidering it for publication in ‘a few months.'”

Matthew Balan, a news analyst at MRC, notes that while the Times is entitled to choose what ads to run, its response simply proves one of Geller’s points that “almost no Catholics are likely to respond violently even to harsh criticism of the Catholic Church – but enough Muslims are likely to respond violently to harsh criticism of Islam (whether the response is against the critic or against others) that the Times itself views such criticism as unsafe.”

There are plenty of peace-loving Muslims, but “unfortunately there are also enough extremist Muslim thugs to affect what the Times is willing to publish,” Balan adds.

In a statement, Catholic League‘s Bill Donahue on Tuesday cited examples of “the reaction of bigots to the Hobby Lobby case.”

“‘Court’s Catholic Justices Attack Women’s Rights’ is the headline of Margery Eagan’s Boston Herald article (it’s those Catholics again). The American Humanist Association issued a statement with a picture of a rosary next to birth control pills. Cute,” Donahue said.

He also referred to The Huffington Post, in which Ryan Grim noted that “these men [the five judges who voted for religious liberty] are Christians.” He also said, “The Supreme Court ruled Monday that Christian business owners are special.”