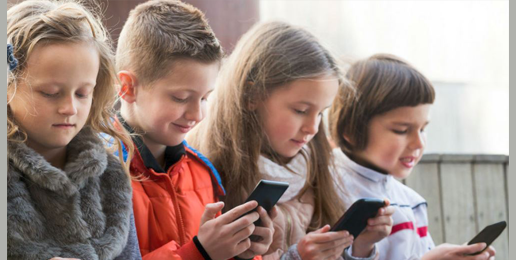 For many years people have insisted that the online world is not the “real world.” There are elements of truth to this —a screen avatar can never capture the fullness of who someone is and the filtered versions of ourselves that we present on the internet can often hide what is actually happening in our lives — but in the nearly two years since the beginning of the COVID-19 pandemic, many of us have found ourselves, at some point or another, living significant portions of our lives online. As we grapple with this brave new world it is important that we recognize how the shifting digital landscape affects children and teens and the ways that it can harm them.

A recent report from Thorn found that 14 percent of 9 to 12-year-olds had shared explicit images of themselves in 2020 and 21 percent said it was normal for kids their age to do so. Nearly one in five teens had shared sexually explicit images of themselves. Thorn’s report also found a rise in children using secondary accounts to avoid online supervision. In 2020, 25 percent of 9-12-year-olds surveyed said that they were using at least one secondary account and 73 percent said they would prefer not to say. This lack of supervision leaves kids vulnerable to online predators and exposure to explicit content. Of the minors who reported that they had shared sexually explicit images of themselves, half said that they had shared those images with someone they had never met in real life, and over 40 percent reported having shared the images with someone over the age of 18.

As shocking as this is, it is sadly not surprising given the rise in pornography use across all age groups and the increasingly violent and exploitative nature of that content. According to Fight the New Drug, “teen” was one of the most popular search terms on one of the largest pornography platforms for five years running. When fantasizing about sexual exploitation becomes accepted as “normal,” real-life exploitation increases, which is exactly what is happening with the growing number of children sharing self-generated child sexual abuse material.

An important thing to realize when considering this trend is that children are listening to what the culture around them says about sexuality. When “sexting” is treated as normal, healthy, and “empowering,” it is hardly surprising that kids imitate this behavior. People deserve to be treated with more dignity than that and young people need to know that their bodies and God-given sexuality are good and beautiful — and what is good and beautiful should be valued and protected, not flippantly distributed on the internet.

Sexual exploitation is not the only issue that has arisen around kids and technology. Recreational screen time among 12 to 13-year-olds has doubled since the beginning of COVID-19 related lockdowns, reaching over seven and a half hours per day. Increases in screen time, including time spent on social media, has coincided with an alarming rise in depression and anxiety among children and teens. This is especially prevalent in girls, but it affects boys, as well. In addition to depression and anxiety, too much screen time can result in trouble sleeping and irregular sleep schedules, behavioral problems, poor academic outcomes, and desensitization to violence.

To address this, families need to be intentional about how they approach technology, recognizing how the design of a device may encourage isolation, making sure that young children do not have unfettered and unsupervised access to the internet, and helping teens establish healthy boundaries and accountability around devices. Parents need to make sure that they are aware of their children’s online activities and how that may be affecting them, and they also need to make sure that their own habits around technology set a healthy example for their kids.

Many adolescents have expressed that they wish their parents had more rules about screen use. This is imperative, not because we don’t want to treat teens as emerging adults but because we recognize that, as emerging adults, they need to develop habits of discipline. Moreover, preventing kids from interacting with strangers on the internet and sending explicit images is just as important as helping them understand that they shouldn’t get in a car with a stranger or that there are certain places where no one should ever touch them.

Because children are valuable their bodies, hearts, and minds should be protected. Part of protecting children’s bodies, hearts, and minds is helping them safely navigate the digital landscape, including setting boundaries on how much time they spend in front of screens and what online activities they engage in. Children deserve not to be exposed to sexual content online or in person. They deserve to be taught that their bodies matter and should be treated as valuable. And they deserve to know that their hearts are precious and that they matter to the adults in their lives – and that those adults will work to protect them from harm.

This article was originally published by Minnesota Family Council.

Public Education is Making Our Children Illiterate
b
a
x
r