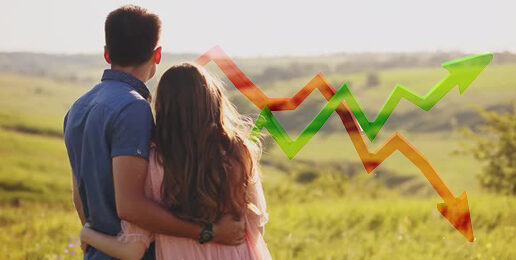 My wife and I recently celebrated our tenth wedding anniversary.

I guess you could call that one of the first big milestones.

Compared to a lot of older folks, of course, we’re still just getting started—practically newlyweds. But still, a decade isn’t exactly nothing.

If I’ve learned anything in ten years of marriage (besides the fact that marriage is pretty awesome), it’s that my wife has to be one of the most patient, gracious people I’ve ever known. In our ten years together, she’s had to put up with a variety of challenges: long-term income irregularity, my struggles with some mental health issues, giving birth to five children, living in our “starter home” much longer than we intended (let’s see . . . ten years and counting!), and a variety of other challenges that could easily tax her patience.

But she never criticizes, belittles, or nags. She doesn’t cut me down or compare me to other husbands who may be more successful providers. And she’s never, ever made so much as the slightest hint that she’d be better off without me or that she could do better elsewhere. Despite the life struggles, I know she’s 100% committed to me and our marriage.

Now, let me pause for a moment lest I give the wrong impression. I don’t want to imply that our first ten years of marriage have been nothing but a long parade of problems. We’ve had lots of wonderful times and made some great memories. We’re happily married and very much in love.

Nor am I suggesting that the challenges we’ve faced are particularly unusual. On the whole, the difficulties we’ve encountered probably don’t fall much outside the mainstream. If we could all get together and swap stories, most of us would find that some couples have had an easier time than us, and some have had it harder—some a lot harder. We live in a fallen world and perfection isn’t to be had this side of eternity.

The point isn’t the difficulties themselves, but our response to them.

My wife could very easily have decided to give up at a variety of points in our marriage. When some mental health struggles of mine spun out of control several years ago and became a dominant force in our lives. When the family business I had been part of was struggling and finally shut down after fourteen years. When my next business venture didn’t get off the ground right away. These were stressful times and it would have been easy for her to say, “This isn’t what I signed up for. I want out.”

But she didn’t say that.

She stuck with me.

And I’m grateful for that. Truth be told, I’m not sure what would have become of me if she had ever suggested that our relationship was up for discussion when other parts of our lives were hard or uncertain.

I’m not here to claim vast expertise on the topic of marriage, but I do know that husbands and wives have an enormous ability to impact each other for good or bad. We can build each other up, or tear each other down. We can give each other a sense of security and belonging, or we can sow doubt and uncertainty. That’s a huge amount of influence to wield over another human being, but marriage, of course, is unique among all human relationships. It makes sense that the stakes would be unusually high.

Difficult times are unavoidable.* Life is a mixture of good and bad, ups and downs, highs and lows. These various situations can certainly impact our relationship with our spouse, but life is much better when we bring grace to the inevitable hard times.

I don’t know what the next ten years will bring. If our first ten are any guide, there will be a lot of good mixed up with a fair amount of challenge and a large dose of the unexpected. But whatever comes our way, we plan to stand by each other. And by God’s grace, we’ll be stronger and more in love than ever before.

*Please note that I’m not trying to give advice for tragic situations like abuse or infidelity. If that’s your situation, I suggest seeking counsel from wise believers who can give you Biblical and practical guidance on how to navigate your particular situation.