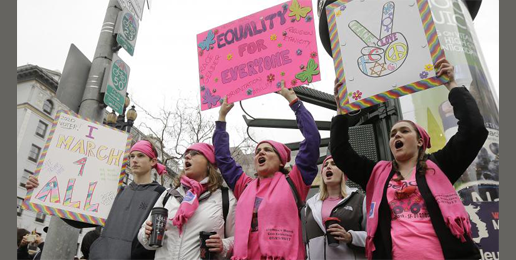 If you were to come across someone who cried in the streets, who saw the world in terms of black and white and made death threats against strangers, who cowered in a special room and made public displays of naked self-harm and blood letting, you might conclude that they were suffering from a personality disorder.

All these symptoms can be found in the High Conflict Personality Disorder category known as Axis II in DSMV, including Anti-Social PD, Histrionic PD, Paranoid PD, Narcissistic PD, and Borderline PD.

Alternatively, you might reason that these are the everyday behaviors of the modern Social Justice Warrior (SJW).

Of course, not every SJW has a personality condition, but sufferers from High Conflict disorders are often drawn to extreme beliefs and behaviors under the illusion that they are acting politically.

A 2016 UK survey found that, since 1990, rates of depression and anxiety among the young have increased by 70 percent, while The American Counseling Association has reported a “rising tide of personality disorders among millennials.”

That such disorders appear to be an acute problem with this generation may be an unintended outcome of the unprecedented, parenting experiment conducted in the 1990s and 2000s by progressive parents.

Persecution Complex and the “Safe Space”

In 2014, a survey of 100,000 college students at 53 U.S. campuses by The American College Health Association found that 84 percent of U.S. students feel unable to cope, while more than half experience overwhelming anxiety.

A byproduct of such fear has been the growth of the “safe space,” a safe-haven for minority groups and distressed students from what they perceive as threats within campus life. Safe spaces contain comforting objects that evoke childhood — bean bags, soothing music, Play-Doh, coloring books. The spaces often forbid entry to straight white men or political opponents.

The idea of “running to the safe space” is a form of psychological regression. The safe space presents a fantasy barrier against imagined exterior evils, and so encourages persecution paranoia and hyper-fragility. These are all symptoms of histrionic, borderline, and paranoid personality disorders that emerge from problems with the early child-parent bond.

The majority of millennial children (now aged 18-34) had two working parents; this was partly an ideological project of feminism and partly economic necessity. The downside was the damage done by daycare, services for which grew by 250 percent between the 1970s and 90s (see Laura Perrins’ work on psychological trauma caused by daycare). According to Bowlby’s Maternal Deprivation Thesis, babies require two years of intimate attention to enable them to form the caregiver-child bond essential for secure ego formation. Any disturbance of this process will “predispose the children to respond in an anti-social way to later stresses.”

The National Institute of Child Health and Human Development has found:

Children in full-time day care were close to three times more likely to show behavior problems than those cared for by their mothers at home.

The more time in child care of any kind or quality, the more aggressive the child.

The result is young people who, a decade and a half after daycare, scream at the parent/State for not protecting them sufficiently. It is no coincidence that “safe spaces” resemble daycare centers.

Unfortunately, “safe spaces” enforce the distressed person’s fear of the world, trapping them in their original trauma within a psychological frame of permanent and inescapable victimhood.

For the SJW, everyday speech contains a multitude of “microaggressions,” or subconscious power dynamics which conceal colonial or patriarchal oppression. Failing to use the words prescribed by SJW activists — most particularly in the case of “trans-people” — is seen as an act of violence equivalent to physical assault. See, for example, a statement made by a protester at UC Berkeley in January 2017 at a protest event that turned into a violent riot:

Your free speech is raping and killing us.

People with High Conflict Personality Disorders experience similarly paranoid emotions about hidden messages, omnipotent threat, and imminent violence. They are hyper-alert and live with higher than normal levels of cortisol and adrenalin, which in turn causes lasting neurological damage, affecting their ability to reason and to regulate emotion. They panic easily and regress to infantile distress.

Faced with histrionic students, university staff end up behaving like “Helicopter Parents”: those largely absent, full-time working parents who overcompensated by flying in to fuss over their child. Attempting to assuage parental guilt, one of the tools they used was “positive parenting” — a philosophy created by social Progressives.

Parents were taught to not scold or punish, and instead to use “positive reinforcement” in an attempt to raise their children with “high self-esteem.” This ideology also became fashionable within an increasingly progressive school system that awarded children prizes for “non-competitive sports” and for merely taking part in school activities.

As they passed from day care to through high school, these children with artificially enforced high self-esteem were also told that they were morally superior to generations that came before. They were inducted into politically correct language and were even taught to lecture their own parents on racism, equality, and ecology. From the ages of six to eighteen, they took part in yearly multiculturalist “save the planet” projects. They were told they had a heroic destiny as “agents of change.”

A false picture of the world and a vastly inflated sense of self-importance did not compensate for the foundational trauma of parental neglect. Instead, as Dr. Jean Twenge has explained, Positive Parenting created young people with a “narcissistic wound” for whom the real world would be a perceived as threat to self-worth.

The Positive Parenting movement expounded the beliefs that “there is no boundary between you and your child” and that “you are friends and equals.” For the child growing up without “paternalistic laws” and boundaries, the only way to find limits was to attack the only boundary it knew: its own bodily boundaries.

In this light it is worth exploring why the Fourth Wave feminist/social justice activist group known as “Femen” should mimic the outward signs of the BPD sufferer. Their trademark form of protest is public toplessness, with slogans written over the belly and breasts in fake or real blood. One classic Femen image is of an almost-naked woman holding a protest sign that reads: “Rape Me. I’m a Slut.” The intention may have been to demonstrate that no matter how sexually a woman dresses she is still not “asking for it.” But public nudity as a protest against sexual violation is a contradictory signal — and sending out conflicted messages around dangerous sexual subjects is a symptom of BPD and NPD.

The Femen protester may subconsciously be saying, “show me boundaries and control, show me authority and concern.” She might be displaying the pain of living within a self-in-contradiction.

SJW protests are awash with contradictions. SJWs claim to fight for freedom, but are opposed to freedom of speech, support banning videos and books, and support the violent disruption of public talks, as was seen with the riots at UC Berkeley, Middlebury College, and elsewhere.

SJWs believe in a world with “no boundaries” where “everyone is equal” — free immigration, open access to healthcare and education, etc. — but at the same time are obsessed with creating segregated spaces.

While they protest against the “fascist patriarchal state” they are, at the same time, fundamentally Statist, demanding that the government police language for them and punish their enemies. While SJWs claim to fight for human rights, they parade the symbol of the largest genocides in history — the Communist flag. They are pro-feminist, and at the same time defend Sharia law.

Living-in-contradiction is similar to the “Love me — I hate you,” dynamic in Borderline pathology called “Splitting.” In splitting, everything is “all or nothing,” and the thing that was passionately idealized suddenly becomes an object of hatred. Traitors are everywhere. This was exemplified by the expulsion of gay men and “TERFS” — “Trans exclusionary radical feminists” — from LGBT+ groups by Intersectional feminists.

Along with splitting comes the symptoms of low impulse control, histrionics, dysphoria, a pervasive sense of emptiness, suicidal ideation, and self-harming.

Symbolic demonstrations of self-harming behaviors are widely used in SJW protests. Along with smearing faces with fake blood to signify female oppression, a protest group called Lesbians and Gays Support the Migrants in the UK in 2015 took razors to their arms in public to “spill rivers of blood.”

With an attempted self-immolation and a reported “contagion” of suicide threats occurring during the Trump protests, thousands attempted to use politics as an alibi for a deeper inner compulsion to self-harm.

The Results of the Human Experiment

Trapped among infant neglect, artificially elevated self-esteem, and identity dysphoria, the Millennials were set up for a fall.

When they were pushed out of their parental homes in the 2010s, they discovered they did not have the tools to construct stable selves. They couldn’t blame their parents or teachers. Instead they searched for a vast, abstract, all-encompassing enemy. In identity politics they found a temporary unity, through hatred of Patriarchy, of Capitalism, of White Men.

In President Trump they found their savior.

In the stages before psychosis, sufferers from High Conflict Personality Disorders fixate on one object of hate. Subconsciously, they need this super-enemy so they can feel whole. This is the tragic truth of the identity politics of the SJW. Without a totalizing object of blame, the personality of the warrior for social justice falls apart.

While the SJWs idealize themselves as victims of omnipresent evil, they are in fact the victims of well-meaning liberal parents and progressive teachers who subjected them to an experiment in social engineering. They were the guinea pigs of the progressive project. Older generations of radicals then exploited their volatility and rage for political ends.

What the Social Justice Warriors are actually asking for, when they scream at us, is our help.

This article was originally posted at PJMedia.com