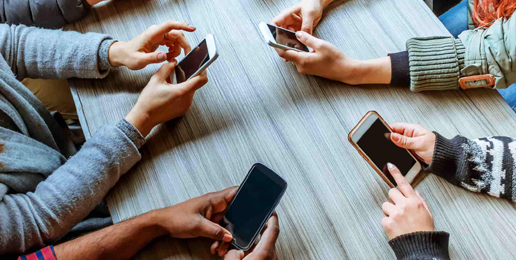 Many of you are probably familiar with these opening lines from the classic Charles Dickens’ story A Tale of Two Cities. Well representing so many areas of our nation and our culture today, I choose to apply these opening words to the vast landscape—or virtual wasteland—of information and entertainment via technology that is only a click away via our devices.

Dickens writes about a time of extreme opposites without any in-betweens; our goal here is to recognize the extreme polarization these devices offer, yet aim at some guidelines that will, hopefully, land us somewhere in-between. That middle ground being a wise use of screens, as opposed to not using them at all or using them without restriction, having no concern for the inherent dangers they bring. While children are my main concern here, adults have also been taken captive by the alluring blue glow of their screens.

On one hand our digital devices offer “wisdom,” “Light, “the spring of hope,” and seemingly hold out “everything before us.” After all, one can read our newsletter, listen to our broadcasts, and receive our emails or those of other ministries on their favorite screen. I often “join” a congregation in Pennsylvania on Sundays, to be encouraged by great messaging. I use screens for research and occasionally to study God’s Word with online resources; what a terrific tool our screens can be.

On the other hand, digital devices also epitomize “foolishness,” “Darkness,” “the winter of despair,” and a great wasteland of “nothing before us.” We seem compelled to waste vast amounts of time with them. Males and females of all ages post or view photos or movies that range from immodest to pornographic; multitudes go from being entertained to becoming addicted; what should be used for good becomes a tool for evil as our baser side is unleashed. We have written about the dangers of hiding behind screens, neither being seen nor seeing, as we respond to others or mention them on social media. After all, who is to see, know, or care? Well, God sees; God knows; and God definitely cares about our smartphone use.

Regardless of how our children are using their smartphones, the amount of time they are on them is an issue in itself. The National Institutes of Health (NIH) reports that nine- and ten-year-old children who spend more than two hours in front of a screen each day score lower on thinking and language tests—the average “tween” spends up to six hours a day on their screens.

Bloomberg reports that “the scans of children who reported daily screen usage of more than seven hours showed premature thinning of the brain cortex, the outermost layer that processes information from the physical world.”

There are studies that show a relation between smartphone use by children and sleep deprivation and poor attention span—two-thirds of children take their devices to bed with them; some even laying their phones on their pillow for fear of missing a text.

Digital addiction is a very real and growing problem.The Henry J. Kaiser Family Foundation introduces their 2010 study on “Media in the Lives of 8- to 18-Year-Olds,” in part: “Eight- to eighteen-year-olds spend more time with media than in any other activity besides (maybe) sleeping—an average of more than 7½ hours a day, seven days a week…”

In a recent USA Today article we read that over 200 million mostly obsessed people are playing an online game called “Fortnite.” Some of these players are engaging in battle during school instead of paying attention to their teachers. Digital addiction is becoming more commonplace and most parents are at a loss of how to handle it. Other sources warn that victims of digital addiction can experience “destructive dependence, extreme change of personality, isolation, and physical signs during withdrawal.”

Research shows that teens who spend five or more hours per day on their devices are 71 percent more likely to have one risk factor for suicide—regardless of what they are viewing. Half an hour to one hour a day seems to be the ideal for teen mental health in terms of electronic devices. “Kids who use their phones for at least three hours a day are much more likely to be suicidal.” (Businessinsider.com)

None of the above should surprise us; especially considering that Bill Gates and Steve Jobs raised their kids mostly tech free. For that matter, most Silicon Valley parents are strict about technology use—shouldn’t that raise red flags? Shouldn’t that encourage us to set some very definite limits?

Setting limits is very important; but we must also model those limits. Here are some general guidelines to start; more to come at a later date.

Keep certain times and places “screen-free.”  For starters, at mealtimes we should focus on one another instead of our phones. Intentionally set aside device free “family time,” where you can play games, talk, or work on projects together. There are some families that put their cell phones in a basket upon entering their home to intentionally be present with their family. As for places, bedrooms should definitely be off limits and any zone you choose to allow devices should be public and always available for anyone else to view.

As you set limits, help them to understand that there are dangers associated with smartphone use.

This article was originally published at AmericanDecency.org