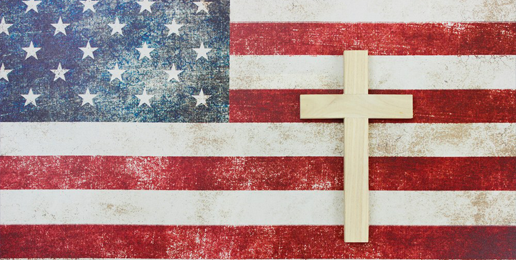 Should Christians Get Political?
Written By Christine Misner   |   06.27.20
PRINT

According to an old adage, there are things people should avoid discussing with friends, at dinner, at work, or just about anywhere else – politics, religion, and money. Lately, however, politics and religion have been issues people can’t seem to steer away from; they keep popping up in every almost every area of life. Politics, once held at a distance from the church and religion, is now co-mingling with congregants in the pews.

Dr. Bruce Ashford believes religion and politics cannot be separated. In a recent online event, Ashford, an author and professor of Theology and Culture at Southeastern Baptist Theological Seminary in Wake Forest, N.C., described politics as “the art and science of persuading one’s fellow citizens for the common good.”

Most Christians are familiar with the often-quoted passage from Matthew in which the Pharisees tried to trip Jesus up by engaging him in a debate that was both political and theological.

“’Whose image and inscription is this?’ they asked them.

‘Caesar’s,’ was the answer.

It didn’t trip up the Son of God then, but it trips people up today. Those passages may not always be applied accurately in sermons, but Ashford said they’re an example of God’s design for how to deal with politics.

“I believe in the separation between church and state,” Ashford shared. “The church teaches that their ultimate allegiance is to God. The government teaches to bring justice.

Ashford also talked about the current political climate in the United States and the Coronavirus pandemic. Looking at lessons learned from history, he noted, “Whenever a nation is deeply divided it usually takes something cataclysmic to bring a nation back together… God has people’s attention. People are paying attention.”

If such a thing were to happen, he predicted it would begin happening at a local level and work its way up. He said that the key is to reach across lines of division. One of the best ways to do it starts with diffusing the anger that may be present. “When people express their views, they often express them in a really over the top, angry way,” he suggested. “You can diffuse that by expressing a common concern. At least 50 percent of the time you can have a really good conversation with someone who’s been really angry.”

He cautioned, “Don’t go into it hoping to persuade them. Ninety percent of the country can’t be persuaded right now.”

In the end, no matter our political feelings, it’s our belief in Christ that unites us and will take us into eternity.

When we die one day, Ashford said, “We will meet God as Americans, it is one identity of which you’ll give account.” However, he noted, we will meet him with a greater identity, that of a Child of God. “As a Christian we can look death in the face,” he declared.

From the discussion “Politics & Christian Witness in a Secular Age.”