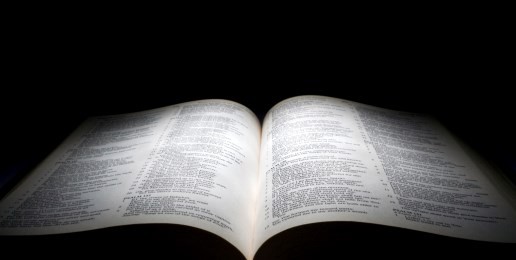 The Bible tells us that the king of Israel once wanted to hear from the prophets, as to whether he would be victorious over his enemies. All the court prophets told him exactly what he wanted to hear. Yet the king of Judah, wisely, asked whether there might be another voice to hear from, and Israel’s king said that, yes, there was, but that he hated this prophet “because he never prophesies good concerning me” (1 Kings 22:8).

Once found, this prophet refused to speak the consensus word the king wanted to hear. “As the Lord lives, what the Lord says to me, that I will speak” (1 Kings 22:14). And, as it turned out, it was a hard word.

When it comes to what people want to hear, it seems to me that the church faces a similar situation as we look to the future of marriage in this country. Many want the sort of prophetic witness that will spin the situation to look favorable, regardless of whether that favor is from the Lord or in touch with reality.

Some people want a court of prophets who will take a surgeon’s scalpel to the Word of God. They want those who will say in light of what the Bible clearly calls immorality, “Has God really said?” Following the trajectory of every old liberalism of the past, they want to do with a Christian sexual ethic what the old liberals did with the virgin birth—claim that contemporary people just won’t have this, and if we want to rescue Christianity, this will have to go overboard. All the while they’ll tell us they’re doing it for the children (or for the Millennials).

This is infidelity to the gospel we’ve received. First of all, no one refusing to repent of sin—be it homosexuality or fornication or anything else—will inherit the kingdom of God (1 Cor. 6:9-10). This strategy leaves people in condemnation before the Judgment Seat of Christ, without reconciliation and without hope.

Second, it doesn’t even work. Look at the empty cathedrals of the Episcopal Church, the vacated pews of the Presbyterian Church (USA), and right down the line. Let me be clear. Even if embracing same-sex marriage—or any other endorsement of what the Bible calls sexual immorality—“worked” in church-building, we still wouldn’t do it. If we have to choose between Jesus and Millennials, we choose Jesus. But history shows us that those who want a different Jesus—the one who says, “Do whatever you want with your body, it’s okay by me”—don’t want Christianity at all.

But there will be those who want prophets who will say that the gospel doesn’t call for repentance, or at least not repentance from this sin. These prophets will apply a selective universalism that denies that judgment is coming, or that the blood of Christ is needed. But these prophets don’t speak for God. And, quite frankly, we have no one to blame but ourselves since, for too long, too many of us have tolerated among us those who have substituted a cheap and easy false gospel for the gospel of Jesus Christ. Too many have been called gospel preachers who preach decision without faith, regeneration without repentance, justification without lordship, deliverance by walking an aisle but without carrying a cross. That gospel is different from the one Jesus and his apostles delivered to us. That gospel doesn’t save.

So when these prophets emerge to tell people they can stay in their sins and still be saved, we must thunder back with the old gospel that calls all of us to repentance and to cross-bearing, the gospel that calls sin what it is in order to call grace what it is. J. Gresham Machen warned us that our Lord Jesus himself never attempted to preach the gospel to the righteous but only to sinners. Those who follow him must start by acknowledging themselves to be in need of mercy, to be in need of grace that can pardon and cleanse within.

There’s also another form of court prophet of these times. This one has no problem identifying homosexuality as sin. He may do so with all sorts of bluster and outrage, but he still does what court prophets always do—he speaks a word that people want to hear. What some people want to hear is that sexual immorality is moral after all, and what other people want to hear is that same-sex marriage is simply a matter of some elites on the coasts of the country. This prophet implies that if we just sign checks to the right radio talk-show hosts, and have a good election cycle or two, we’ll be right back where we were, back when carpets were shag and marriages were strong.

I don’t know anyone in any advocacy organization in Washington DC—and there are many fighting the good fight on this one—that is saying that. As a matter of fact, the organizations closest to the ground know just how dark the hour is. The courts are hell-bent on redefining marriage, which is why state definitions of marriage, put in place by the citizens of those states, are being struck down. This isn’t happening simply in blue states but in the reddest of red states—Utah, Oklahoma, Kentucky, Tennessee, and so on.

The Supreme Court said last year, in a shocking ruling, that essentially the only reason anyone could have for defining marriage the way every human civilization has for millennia is hostility toward gay and lesbian persons. The answer is not a simple constitutional amendment—though that would be optimal—because any constitutional amendment would require a super-majority in both houses, that, apart from a miracle, no one sees happening in the next several years, now that the Democratic Party is firmly behind same-sex marriage.

What several of us have been saying for quite a while is that, in some form or another, your church will have to address the marriage revolution. My friend Jeff Iorg, president of Golden Gate Seminary in California, has courageously called the church to see that everyone will soon have to be standing where he is standing now. He’s exactly right. The cultural trends are such that the red–blue divide will not ultimately isolate any congregation from this Sexual Revolution, and all it entails.

Moreover, the situation isn’t as easy as just an election or two, given the vast cultural changes that have happened.  I—and my co-laborers in other organizations—are fighting every single week in court cases, in hearings, in state disputes for the most basic of conscience protections for those who dissent from the High Church of the Sexual Revolution. Look at the way Louie Giglio was deemed too toxic to pray at the President’s inauguration in 2013. Look at the way the CEO of Mozilla was hounded out of office simply for supporting a ballot measure defining marriage as between one man and one woman. Look at the way photographers and florists are being forced, under penalty of law, to participate in same-sex weddings. And look at the way that even the most base-level religious liberty provisions are deemed discriminatory.

If the church doesn’t read the signs of the times, we will be right where we evangelicals were after Roe v. Wade—caught flat-footed and unprepared. Thankfully, the Catholics were there to supply an ethical framework and a sense of justice until some evangelicals—such as Francis Schaeffer and Jerry Falwell—emerged to rally for the lives of the unborn and their mothers.

So what should we do? Well, precisely what we should have done before and after Roe. We should recognize where the courts and the culture are, and we should work for justice. That means not simply assuming that most people agree with us on marriage. We must articulate, both in and out of the church, why marriage matters, and why its definition isn’t infinitely elastic.

We must—like the pro-life movement has done—seek not only to engage our base, those who already agree with us, but to persuade others who don’t. That doesn’t mean less talk about marriage and sexuality but more—and not just in sound bytes and slogans but in a robust theology of why sexual complementarity and the one-flesh union are rooted in the mystery of the gospel (Eph. 5:22-33).

We must—also like the pro-life movement—understand the importance of a Supreme Court that won’t will into existence constitutional planks by force of its own will. That requires a persuasive public witness, and a long-term as well as a short-term strategy. That means fighting—as we are doing—for the Court not to invalidate state definitions of marriage and for the culture to recognize that a state that can force people to participate in what they believe to be sin is a state that is too big for the common good.

Above all, we must prepare people for what the future holds, when Christian beliefs about marriage and sexuality aren’t part of the cultural consensus but are seen to be strange and freakish and even subversive. If our people assume that everything goes back to normal with the right President and a quick constitutional amendment, they are not being equipped for a world that views evangelical Protestants and traditional Roman Catholics and Orthodox Jews and others as bigots or freaks.

Jesus told us we would have hard times. He never promised us a prosperity gospel. He said we would face opposition, but he said he would be with us. If we are going to be faithful to his gospel, we must preach repentance—even when that repentance is culturally unwelcome. And we must preach that any sinner can be forgiven through the blood of Jesus Christ. That means courage and that means kindness. Sexual revolutionaries will hate the repentance. Buffoonish heretics, who want only to vent paranoia and rally their troops, will hate the kindness. So be it.

Our churches must be ready to call out the revisionists who wish to do away with a Christian sexual ethic. And we must be ready to call out those who tell us that acknowledging the signs of the times is forbidden, and we should just keep doing what we’ve been doing. An issue this culturally powerful cannot be addressed by a halfway-gospel or by talk-radio sloganeering.

Because the stakes are so high, the Ethics and Religious Liberty Commission is hosting a conference this fall on marriage, homosexuality, and the church. Here we will assemble some of the leading thinkers and pastors on these issues to help you equip a new generation to stand for marriage in tough times, to prepare us to preach the whole gospel to hurting people. Sign up and join us. Bring your leadership, your small group leaders, your deacons, your elders, your Sunday school teachers. Long term the prospects for marriage are good. Sexual revolutions always disappoint, and God has designed marriage, biblically defined, to be resilient. But, short term, the culture of marriage is dark indeed. That’s why we have a gospel that is the power of God.

This article was originally posted at the RussellMoore.com blog.

The Chicago Statement on Biblical Inerrancy