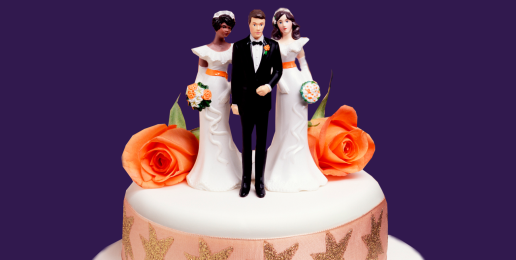 We Were Right About the Slippery Slope of Homosexual Marriage
Written By Micah Clark   |   10.26.16
PRINT

Conservatives, who warned that the arguments for same-sex marriage had no stopping point, were often mocked, dismissed, or ignored when we spoke of polygamy, incest, or polyamory relationships demanding special rights.   Now, many same-sex marriage advocates have admitted that the slippery slope argument was true.

Some are setting the stage for special rights and recognition for multiple partner marriages in the same way they did for homosexual marriage. Notice how this homosexual activist lays the victimization groundwork in favor of misunderstood multiple partner relationships.   In a recent article called “Why Polyamorous People Fear Coming Out” she writes:

“Not long ago, I found myself chatting with a friend about the logistics of coming out to one’s coworkers. Given that I’m queer, and he’s a straight, cisgender man, it’d be reasonable to expect that it was my coming out that happened to be up for discussion. Reasonable, but in this case wrong: The coming out in question involved my friend opening up to coworkers about being one-third of a polyamorous triad.

To monogamous people, the idea of coming out as non-monogamous, or polyamorous, might seem like a strange one.   Sure, it might be something you tell a friend (particularly a friend you’re interested in having sex with), but do coworkers, or family, or the world at large really need to know?   The idea that a non-monogamous family could possibly provide a healthy, positive environment for children is unfathomable: Wouldn’t young minds be warped by constant exposure to sex dungeons and raunchy threeways?

It’s these very stereotypes that make it difficult for non-monogamous people—particularly ones whose extracurricular relationships rarely make it past the casual stage—to fathom being public about their relationship status. Yet it’s also these stereotypes that makes coming out as non-monogamous—and, in the process, normalizing the idea of relationship structures other than two people exclusively bonded for life—feel so important to many who’ve chosen to reject monogamy.

The relief at being able to live openly—to invite coworkers to your house without having to explain why three adults share one bedroom, or to be openly affectionate with your boyfriend without people thinking you’re cheating on your wife—is a huge part of why being out is non-negotiable to many non-monogamists.”

The article closes by citing authors who are laying the groundwork with calls for “equality” for the misunderstood non-monogamous lifestyle. It is a plea to accept people as normal who live with, and have sex with, multiple partners.   No one should really be surprised when calls for “marriage” and special rights for bigamy, adultery, or polygamy start to appear in courts, city councils, or state legislatures.

When society, schools, the media, and many government entities equate anyone who draws a line on traditional marriage with a “bigot,” how do we say ‘no’ to anything one can think up now, regardless of the immorality or negative impact it has upon children and societal heath?

This article was originally posted by AFA of Indiana

The Audacity of Gender-Reveal Parties: Another Step Towards Cultural Insanity
b
a
x
r