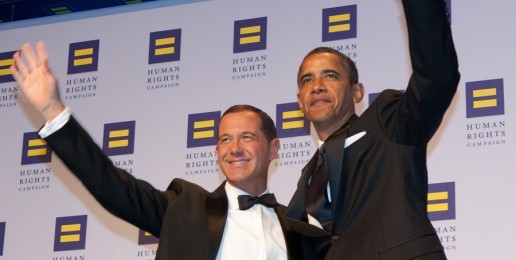 In the past few months, we have seen the LGBTQ lobby working overtime. With the passage of the “civil unions” bill and the consequent assault on the religious liberties of child welfare organizations here in Illinois and the recent legalization of homosexual so-called “marriage” in New York, their agenda is quickly moving to the forefront of the political landscape nationwide.

Yesterday, President Barack Obama issued his support for The Respect for Marriage Act, which would repeal the Defense of Marriage Act (DOMA), the federal law that defines natural marriage as the union of one man and one woman. White House spokesman Jay Carney said President Obama “is proud” to support this federal legislation (S. 598 and H.R. 1116)

This is a monumental show of support for a radical anti-family political agenda by a sitting president that has far reaching consequences. IFI’sLaurie Higgins points out:

Homosexuals are fighting tenaciously to repeal DOMA because they do not want conservative Americans anywhere in the country to have a voice in what types of relationships are recognized by the government as marital relationships. Homosexuals and their ideological allies want to impose their non-factual ontological and moral assumptions on every state regardless of the will of the majority of citizens.

Sponsorship and support for the repeal of DOMA represents either profound ignorance about the nature and morality of homosexuality; the nature of marriage; and the public purposes of marriage, or indefensible cowardice.

Take ACTION: Contact President Obama and to Congress to urge them to defend DOMA, natural marriage and family from the attacks of the far left.

Background
This morning, the U.S. Senate Judiciary Committee held the first congressional hearing on proposals to repeal DOMA. In response to this hearing, Family Research Council President Tony Perkins made the following comments:

The Defense of Marriage Act reflects recognition of the uniquely important role that marriage between a man and a woman plays for society, in encouraging the reproduction of the human race and the joint nurture of children by the mother and father who produce them.

DOMA has stood the test of time, being upheld as constitutional by several courts and successfully ensuring that federal law reflects our national consensus on marriage and that states will not have a radical redefinition of marriage forced upon them by other states.

In every one of the thirty-one states in which the definition of marriage has appeared on the ballot, voters have upheld the definition of marriage as the union of a man and a woman. A national survey released last May showed that 62 percent of Americans agree that ‘marriage should be defined only as a union between one man and one woman.’ All of these facts show that there remains a strong national consensus in favor of defining marriage as the union of one man and one woman.

For more information on the Defense of Marriage Act, read Family Research Council’s pamphlet on the law HERE.

Mock ‘Marriage’ and the Death of Freedom
b
a
x
r