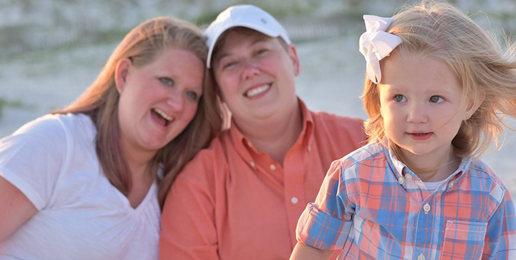 Lesbian couple Terrah and Marisa Pavan
must both be listed on a birth certificate according to ruling by the SCOTUS.
Our Parents, the State
12.11.17
PRINT

Mississippi has become the latest test case for determining parental rights of same-sex couples where one of the adults has no biological relation to the child. Nationwide, disputes are raging about what the U.S. Supreme Court’s decision to impose its redefinition of marriage on all 50 states now means for designations of parenthood, which prior to its opinion, rested on a paradigm that recognized children as the biological creation of a male (i.e. “father”) and female (i.e. “mother”).

But now with the Court’s 2015 same-sex marriage opinion in Obergefell v. Hodges, and even more recently with the Court’s decision in Pavan v. Smith (2017) requiring both adults in a same-sex marriage to be listed on birth certificates, that long-standing paradigm has necessarily shifted. The “logical” effects are unavoidable: To dispense with biology in the marital union is to upend it in matters of parenthood too.

Aside from the most glaring harm of intentionally and officially depriving countless children of either their father or their mother for a lifetime, we should not fail to recognize that the further we go down this road of separating parental rights from biological ties, the closer we move towards enabling the State to usurp parental rights altogether. It’s not rocket science. Once having removed the most sacred, significant, and objective measure of parenthood from its nature – biological procreation – the State by default will delegate authority and recognize rights of parenthood however and to whomever it pleases.

This of course means that while some people stand to gain in this newly constructed system of parenthood, many others will lose and lose big, since a biological connection to one’s child can no longer be afforded any special weight for parenthood determinations in a post-Obergefell society.

This also means that children, and therefore all people, will increasingly become subjects of the State rather than citizens in a free society. (Historical Note: We fought a revolution to untether ourselves from that very kind of tyranny.) There is just no way around it; when marriage and parenthood are defined ultimately by the State, the State naturally assumes the ultimate and unrestricted role of parens patriae.

Welcome to the world, little one. Meet your Parents, the State. (who will assign to you your designated “official parents”)

We’ve seen this before (just elsewhere), and we will be no exception unless we decide to reverse course. What we should have learned by now is that the extent to which the government intrudes upon the dominion of the family, we lose in equal measure the opportunity to govern ourselves. And when that happens, we cease to be free.

Even if, in the end, we were all theoretically okay with that arrangement, we should still know that the State can never be an effective parent for any child. Contrary to the oft-quoted adage, it really doesn’t take a village to raise a child. It takes a mom and a dad. Knowing this to be true, as citizens in a free society (who wish to so remain), we owe it to every child and every parent to see that by all means – governmental and nongovernmental – they are ensured that opportunity.

This article was originally published at The Family Foundation blog.