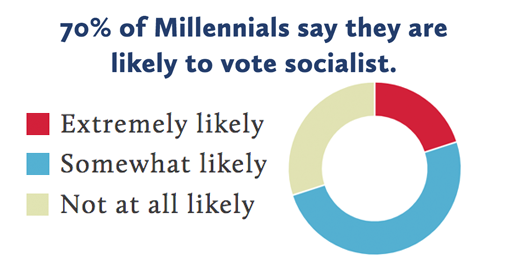 Less than 20 years into the 21st Century and it seems that many Americans have either forgotten, or simply do not know about, what could arguably be described as the largest worldwide scourge of the 20th Century.  Roughly 97 million people died in two world wars.  However, more than 100 million people died under the governing system of Communism in what many historians have called the bloodiest century in the history of man.

Each year the Victims of Communism Memorial Foundation commissions a poll of Americans to find out what they know about Socialism, Marxism and Communism, the triplets of totalitarianism.

Here is what their newly released 2019 survey has found:

• Young people aged 23-38, known as Millennials, and those aged 16-22, known as Generation Z, views of capitalism has taken a big hit with only one-in-two having a favorable view of capitalism.

• Communism is viewed favorably by more than one-in-three Millennials (36%), up 8 points since 2018.

• Marxism has the highest favorability among Millennials at 35%, up 6 points since 2018.

• 7 in 10 Americans do not know that communism has killed over 100 million people.

• Only 57% of Gen Z and 62% of Millennials, compared to 88% of Baby Boomers and the Silent Generation, think that China is a communist country.  (I’d bet that a poll of NBA players and owners is closer to 1%. Most of them seemed to have had no idea that Twitter has been banned by the government of China since 2009.)

• While 80% of Americans say that they trust themselves more than government or community to take care of their own interests, younger generations are 25% less likely to say this.

• Overall, capitalism is still viewed favorably by 61% of all Americans.

• Overall, among all Americans there is more hesitancy to vote for a “democratic socialist” than there was last year.

• Perceptions of communism and Marxism vary widely across generations.

• Only 57% of Millennials, compared to 94% of the Silent Generation think the Declaration of Independence better guarantees freedom and equality over the Communist Manifesto.

• Millennials are much more likely to report communism being presented favorably in K-12 and college than are older generations.

• Baby Boomer opposition to voting for a democratic socialist has increased by 8 points since 2018.

• Nearly half of Millennials think that the government should provide a job for everyone who wants to work but can’t find a job.

• 37% of Millennials think America is one of the most unequal societies in the world.

• One in four Americans say that Donald Trump is a bigger threat to world peace than figures like Kim Jung-un, Xi Jinping and Vladimir Putin.