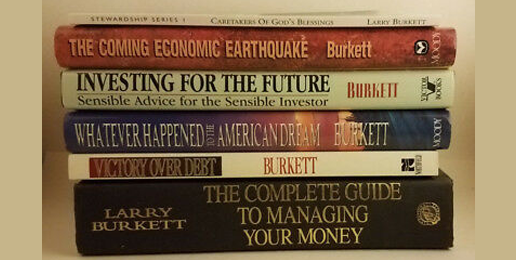 Larry Burkett Was Right–About A Lot of Things
08.28.19
PRINT

If you remember the late, great financial teacher Larry Burkett, your life is likely the better for it. I worked with Larry for several years in his Gainesville, Georgia headquarters of Christian Financial Concepts (and continued to work for the organization from home for many years after my children started coming along). In my mind, he ranks right up there with some of our Founding Fathers in his wisdom, love for this country, and amazing foresight in economic and political issues. He even left this world on the same patriotic day as John Adams, Thomas Jefferson, and James Monroe—on Independence Day, 2003, at the young age of 63. His teachings, which were straight from Scripture, changed my life and bent the twig for my children and hopefully future generations.

The department in which I worked was tasked with answering constituents’ financial questions, so I had to be quite the student of Larry Burkett. In preparation for answering a certain e-mail, I had the opportunity to skim through the pages of Larry’s 1991 best seller, The Coming Economic Earthquake. The book was updated in 1994 to reflect the happenings of the Clinton era, and it’s amazing how accurate Larry was in his foresight of what was coming for our economy and for the nation, in general. He touched on many topics in the book, but some jumped out at me as especially relevant for today.

In light of the battles over the Common Core agenda that was shoved down the nation’s collective throat, Larry said, “Check out the curriculum being taught in your local schools and see if it is anti-free-market. It would shock most Americans to realize that a great deal of the economic information being fed their children in elementary schools, high schools, and especially state universities is blatantly socialistic, if not openly communistic.”

The only place that communism still seems to flourish is in the American classroom. It is often labeled ‘socialism’ but, in reality, it is the same doctrine that was taught in the Soviet Union prior to the communism collapse: Government is the protector of the downtrodden; capitalism is inherently evil; people deserve decent incomes, regardless of their desire to work or not; and last, the government is a better purveyor of the nation’s resources than the wage earners are.

Sound familiar? The very issues that Larry saw as major problems 25 years ago have escalated at an alarming rate.

The government takeover of health care that was attempted during the Clinton administration was delayed only a few years until Obama came into power and had the political backing to force it onto the nation. Larry had great wisdom and forethought in this matter: “Let me say that if the federal government is allowed to take control of health care, which represents approximately 14 percent of our total economy, it will be the stake in the heart of our free enterprise system. The government cannot solve our health care problems—it is the problem!”

Only twelve cents of every government dollar spent on health care now actually reaches a patient. It is a grossly inefficient system. There are two old sayings in Washington that describe what will happen to health care as soon as the political system gains control of that area too: ‘A camel is a horse designed by a government committee,’ and ‘An elephant is a mouse designed to government specifications.’

Wow. If only we had heeded his warning, maybe we wouldn’t be facing the disastrous effects of the government hijacking of our health care system.

Regarding abortion coverage, Larry said, “I rather suspect that, if abortion is accepted as a ‘necessary benefit,’ there would be heavy pressure put on those who oppose abortion to participate or be subjected to financial penalties.” Isn’t this exactly what we’re seeing today? Ministries and faith-based companies (Hobby Lobby and James Dobson’s Family Talk are some of the most recognizable) have been forced to sue the federal government over the abortion mandate in Obamacare. Larry added,

Christians will have to take a stand on this issue, regardless of the consequences. We should have acted with one voice when the Supreme Court decided that somehow an unborn human has no rights. Once abortion is funded through a national health care plan, the number of abortions will likely escalate. God’s people must wake up to this offense now! There is no nation that will survive God’s wrath for long, if and when it decides to kill its young (and old).

When writing The Coming Economic Earthquake, Larry reported that at the current rate of growth, the national debt would swell to $8.7 trillion by the year 2004. Even Larry couldn’t anticipate the rate of reckless spending by the most liberal president in the history of our nation–Barack Obama. Thanks to democrats and republicans alike, I believe Larry would be utterly shocked to know that the national debt is now nearly three times his predicted 2004 level, and it is higher than the Gross Domestic Product of our entire nation.

Writing about the forecasted 2004 national debt of $8.7 trillion, Larry said,

There has never been anything approaching this level of debt funding in the history of mankind in so short a period of time, even on a percentage basis. The effects of this will be felt throughout the U.S. and ultimately the world’s economies…..Either the government will take the necessary steps to control the budget and reduce the deficits drastically, or they will resort to monetizing the debt by printing massive amounts of new currency.

We know which option our leaders chose.

Larry went on to say that,

Logic and common sense seem to play small parts in our present society….The answer [to these and all other issues] is found in God’s Word. All of these things are but symptoms. The real problem is that we have removed God from the decision-making process in America today. When any nation does this, evil will prosper. This is not the fault of the politicians; they are responding to the wishes of the most vocal groups. It is that the unprincipled people around us seem to be more committed to their agenda than the true ‘moral majority’ is to theirs.

Larry urged us to get involved in the political process and the issues of the day so that we could make a difference for the better. I would add that if we want to leave this great nation intact for our children and grandchildren, we have no choice but to hold our leaders accountable for their foolish decisions and force them to make changes that will lead us back to the founding principles that made us exceptional.

Some wise thoughts that Larry left us:

The one certainty is that God is still in control no matter what happens….However, knowing that God is in control does not remove our responsibility to do everything possible to change what is happening or to prepare ourselves for some difficult times. As Proverbs 16:9 says, ‘The mind of man plans his way, but the Lord directs his steps.’

We are to witness to those around us that God is sufficient in all things….God desires followers who will serve Him regardless of the costs. Adversity seems to strengthen us, whereas prosperity tends to weaken us. As the Prophet said in Proverbs 30:8-9, ‘Keep deception and lies far from me, give me neither poverty nor riches; feed me with the food that is my portion, lest I be full and deny Thee and say, “Who is the Lord?” or lest I be in want and steal, and profane the name of my God.’

Larry Burkett left this earth entirely too soon. We need his wisdom now more than ever.

Michelle Thomas is a Christ follower, wife to Trevor Thomas, and homeschooling mom of four. Her books include a devotional for moms, Lord, I Need You, a book about her grief journey, Through Deep Waters, and a chronicle of their financial journey, Debt-Free Living in a Debt-Filled World. Her website is KingdomCrossing.com, and her email is michelle@kingdomcrossing.com.

This article was originally published at TrevorGrantThomas.com.