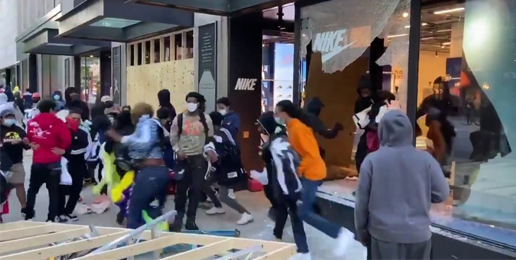 Early reports claimed the rioting and protests were in response to police shooting and killing a child Sunday afternoon in the Englewood neighborhood. That was quickly proven false when police reported the actual incident involved a shootout with a 20-year-old man who was wounded, but not fatally, and had fired first at officers in an hours-long standoff.

But that did not matter to leaders of the group Black Lives Matter Chicago. The Chicago Sun-Times reported the group warned the City’s Mayor Lori Lightfoot in a statement that the unrest would not end until “the safety and well-being of our communities is finally prioritized.”

The statement continued, “The mayor clearly has not learned anything since May, and she would be wise to understand that the people will keep rising up until the [Chicago Police Department] is abolished and our Black communities are fully invested in.” True to their word, the group has continued to hold protests around the city.

CPD Superintendent David Brown said that police have arrested over 100 people, two were shot that night, and 13 officers were injured. Brown described the looting as “pure criminality.” BLM Chicago countered that people were just “protesting.”

According to the BLM Chicago statement, “Over the past few months, too many people — disproportionately Black and Brown — have lost their jobs, lost their income, lost their homes, and lost their lives as the city has done nothing and the Chicago elite have profited. When protesters attack high-end retail stores that are owned by the wealthy and service the wealthy, that is not ‘our’ city and has never been meant for us.”

The next morning, Superintendent Brown said the shooting led to a wave of overnight looting downtown and on the Near North Side that resulted in two people being shot, over 100 arrests, and 13 injuries to officers. Though Brown characterized the looting as “pure criminality,” Black Lives Matter Chicago again claimed that those involved were protesting.

That same day at a demonstration in the city, Ariel Atkins, a Chicago BLM organizer, encouraged looters to take “anything they want to take” as “reparations.”

Atkins doubled down on her previous statement the following day, telling WBEZ radio that BLM supports the looters 100% and they should take “anything they want” as “reparations.”

When questioned about the looters who tried to break into a nearby Ronald McDonald House where frightened sick children and their parents were staying, Atkins defended them, stating, “I will support the looters ’til the end of the day. If that’s what they need to do in order to eat, then that’s what you’ve got to do to eat.”

It’s not just Atkins and BLM Chicago who feel that way. In June, CNN’s Christine Amanpour interviewed Nikole Hannah-Jones, the lead writer for the New York Times’ 1619 Project. Amanpour asked Hannah-Jones about a statement she had made about the act of taking being symbolic for restitution. Hannah-Jones replied,

When we see someone killed by the police, that is the worse manifestation of police violence,”  “but it doesn’t get to the daily violence that doesn’t end in death, or the daily degradation that black Americans face. The fact that these communities have been preyed upon by predatory lenders, it goes on and on. When we think about someone taking something from some big-box name store, it is symbolic. That one pair of shoes that you stole from Footlocker is not going to change your life, but it is a symbolic taking.

Liberal Sun-Times columnist Mary Mitchell came out against the looters in her August 10th column. “Sunday night’s assault on downtown businesses was a brazen display of criminal behavior, pure and simple,” she wrote.

The people who smashed their way into luxe boutiques didn’t do it because they were fed up with police shootings, or because they are out of work and desperate.

They did it because they saw an opportunity to steal stuff they couldn’t afford to buy and because they have no respect for the rule of law.

More than a week has passed since BLM Chicago made its demands. CPD has bolstered efforts to track down looters through social media. Officers are working 12-hour shifts and days off are canceled. Businesses downtown are boarded up and some retailers have announced plans to leave the city. And the protests continue.

Will the mayor acquiesce to their demands? What exactly will it take for BLM Chicago to feel “the safety and well-being of our communities is finally prioritized?” Could the city see the violence get even worse as the November elections approach? Will President Donald Trump send federal intervention? Could the religious community unite and stand as one to push back the evil that’s overtaken Chicago? So many questions… no clear answers.