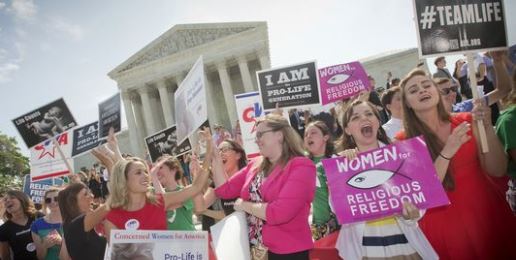 Millions of Americans have lost their insurance and many are now learning that the doctors they had are retiring early or moving to specialty practices as a consequence of Obamacare.  Many Americans are also realizing that under Obamacare and the changes made to insurance plans, the drugs they relied upon are no longer covered to the degree they had been before Obamacare, if covered at all.

This is why I suspect many people observing the Hobby Lobby case with some thought may have asked why contraceptives are required coverage at all.   Maybe the man with whom the woman slept with should help pay for her contraceptives rather than forcing it upon taxpayers and business owners.

Yet, to be clear, in spite of what the media and hysterical liberals are saying this case was not about contraceptives.    The health care law requires companies to pay for 20 different birth control medications or devices.  Hobby Lobby had always covered 16 of those actual contraceptives for their employees.  Where they (logically) drew the line on coverage was with 4 abortifacient drugs that work after conception and may end the life of a child.  Yet, 80 percent compliance is not enough.  In Obamaland abortion is the issue. Not fully supporting abortion and sexual issues exactly as liberals demand is simply not an option.  This is why rather than being given a waiver,  Hobby Lobby faced a business-ending, half a billion dollar, annual fine unless they would ignore their religious convictions and pay for life stopping, abortion-like drugs.

The frighteningly narrow 5-4 ruling never really even got to the free exercise of religion clause of the First Amendment.  When the majority considered the 1993 federal law called the Religious Freedom Restoration Act, it became obvious that the abortion mandate in Obamacare was an undue government burden upon the Christian family who created and owns Hobby Lobby.

It astonishes me how many liberals have been allowed to go unchallenged with their ridiculous claim that this is Hobby Lobby forcing its religious views upon its employees and customers.  No one is prohibited from buying birth control items on their own. They are cheap and everywhere, unlike life saving heart or cancer drugs.   The force of a moral view here was coming entirely from the Obama Administration.

Even worse, some critics disingenuously claimed that this ruling allows companies to choose which customers to serve, pointing back fifty years to Jim Crow racial laws of the South, as if that was never settled.

The Hobby Lobby ruling by the Supreme Court was a victory for religious liberty, business freedom, and a long overdue slap at Obamacare’s abortion mandate.  Though it appears somewhat narrow in scope, it is one all liberty loving Americans can celebrate.  As Justice Alito observed:    “A corporation is simply a form of organization used by human beings to achieve desired ends. Protecting the free-exercise rights of corporations like Hobby Lobby … protects the religious liberty of the humans who own and control those companies.“