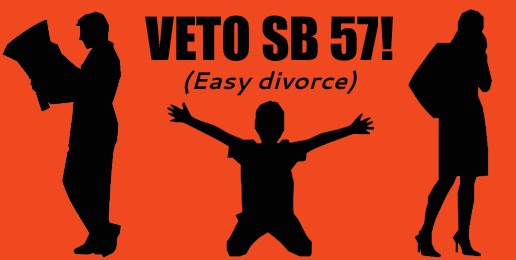 That’s why it’s important that you contact the Governor’s office and urge him to veto Senate Bill 57, which has passed both chambers in the Illinois General Assembly.

SB 57 seeks to make divorce in Illinois easier and quicker and greatly reduces the chance of reconciliation, thereby placing more mothers and children at future risk of poverty.

SB 57 allows one spouse to file for divorce after a 6 month separation even if the other spouse does not want the divorce. Furthermore, it tramples parental rights by providing for visitation rights for non-relatives.

SB 57 is attempting to create a back door to termination of parental rights by using the ‘preponderance of the evidence standard’  instead of the “clear and convincing evidence” standard. (p. 133 line 18-25) SB 57 uses this arbitrary standard to award or deny parental rights and seeks to deny access to school and medical records to any parent not awarded parenting time. (p. 136 line 6-9)

The Due Process Clause of the Fourteenth Amendment requires more than a preponderance of the evidence standard when denying parental rights.

Yet SB 57 uses a higher standard of proof, ‘clear and convincing,’ to restrict or remove visitation from a non-biological parent once allocated, such as a step parent, grandparent, aunt, uncle or sibling. (p. 145 line 1-11)

This bill will NOT lessen litigation and help children.

Children are the reason the court battles continue for years after the divorce or separation. Under this act both litigants will now have to prove their level of parenting and how much time they spent in order to derive which parent will become the “primary responsible parent” and which parent will be the parent who will fill the traditional non-custodial parent role, which in turn is going to cause longer litigation from the onset and  severe mental and emotional harm to the very children it looks to protect from such effects.

The effects of a missing parent on a child are devastating, often causing them to fall behind in school, get involved in drugs, teen pregnancy, teen suicide, bullying and the list goes on and on.

SB 57 will further weaken the family structure and should be strongly opposed.

More ACTION:  On Saturday June 27th, Illinois Fathers will host a rally and candle light vigil outside of the Governors Mansion in Springfield to urge a veto of SB 57. At dusk, organizers will begin a candle light vigil which will go through the night into the early morning of Sunday June 28th. Sunday morning they will hold a prayer service then dismiss around 9am.  Learn more HERE.