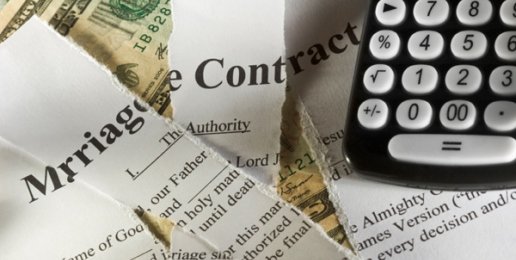 Marriage has fallen on hard times. Half of America’s marriages have ended in divorce since 1975 – a divorce rate that is triple that of Britain or France.

It is must reading for anyone considering divorce.

“Mending your marriage is good for you and for your partner,” she writes. “Overcoming problems will teach you how to prevent future problems in your marriage…On the other hand, divorce harms your self-esteem, your present and future health and your standard of living.”

Of course, children will benefit from what she calls the “two-parent advantage.” They’ll learn from you how you resolve conflict, learning that rifts between people can be overcome. However, “your children will suffer if you divorce. Your separation will have permanent psychological effects, perhaps crippling their own romantic relationships.”

Oddly, no seminary teaches pastors how to heal marriages. For example, Rev. Jeffrey Meyers of Overland Park, Kansas said he was flummoxed by a husband whose wife wanted a divorce, not knowing what to say.

Unfortunately, every state has passed “No Fault Divorce” laws which allow either spouse to declare the marriage “irreconcilable.” Four out of five of their spouses disagree, but can’t claim in court that the marriage IS reconcilable. Medved comments: “You are half of your marriage, yet…it seems you are not as important as the partner who wants out.”

Since California Gov. Ronald Reagan signed the first No Fault Divorce law in 1969, the number of divorces nearly doubled in a decade from 639,000 to 1,189,000. Medved writes, “The general importance of children in divorce has led some marriage advocates to suggest that except in abuse cases, a divorce shouldn’t be granted to those with kids unless both parents agree to it.”

Medved footnotes that statement with a reference to my book, How To Cut America’s Divorce Rate in Half – A Strategy Every State Should Adopt. If state divorce laws required couples with children to agree to divorce, I believe the divorce rate could be cut in half. To date, no state has taken this step.

What most pastors do with marriages in crisis is refer them to counselors – a big mistake. “All forms of marital counseling are associated with a two- to three-fold increase in the likelihood of divorce,” according to a book, Covenant Marriage.

Medved asks, “Are you an honest person?” If so, how could you be unfaithful to your spouse?

Even if infidelity is not an issue, divorce forces you to disconnect with the person you vowed to love forever.” That “strips away joy, injecting sadness and despair.”

Therefore she argues for the alternative: to consider the long-term view, “preserving the history you’ve shared with your spouse, and creating footing for an improved future. Divorce, on the other hand, dishonors the vow you made, cuts off a substantial portion of your life (and) harms your children.”

Medved notes that two-thirds of marriages are in “low-conflict marriages” which “offer the best hope for being saved, and strengthened for the sake of children. Staying together for their welfare is perhaps the most important stand a married couple can take for their children’s future.”

The major reason people divorce is that they think they will be happier, perhaps with a new mate. However, a British study reports that 54 percent of those who divorced, later regretted it. Many who divorce hope for a happier remarriage. However, millions remain single after a divorce. In the “marriage market” a divorced person is not as desirable to the opposite sex as the never-married.

Two-thirds of those with children who remarry – experience a second divorce! Why? There are perpetual fights between kids and stepparents. Kids say, “I don’t want a new mom,” and can drive her out.

Medved poses a disturbing question: “If you saw your children downing in a lake, would you jump in to save them?” Of course. “But if you divorce, you throw them into the lake…Therefore, change the negative aspects of your marriage.”

Here’s some good news. Two out of three unhappily married couples who avoided divorce and worked at their marriage – ended up happily married five years later!

Mike McManus, a Duke graduate, was a reporter for three small papers before joining TIME magazine as its youngest correspondent in 1963. Mike started writing a syndicated column in 1977 called “The Northern Perspective,” suggesting how to revive the economy of America’s old industrial states from Maine to Minnesota. At its high point, the column was in 70 papers. In 1981, he began writing a second syndicated column, “Ethics & Religion.” For 11 years he wrote both weekly columns, but discontinued writing The Northern Perspective in 1992 when he got a contract to write a book, Marriage Savers: Helping Your Friends and Family Avoid Divorce, published in 1993 and expanded in 1995.

Mike and his wife, Harriet, are co-founders of Marriage Savers, an organization devoted to helping churches virtually eliminate divorce in their congregations and to pushing down city-wide divorce rates.

Making Too Much of Marriage?
b
a
x
r