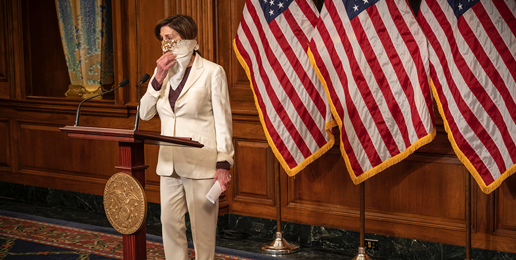 Coronavirus Should Remind Us Big Government Isn’t The Answer
05.14.20
PRINT

In mid-March, Politico ran a series of short essays from “experts” on how coronavirus would change the world permanently. If you’re curious why I designate them as “experts” rather than experts, the authorities they assembled consisted of a cadre of college professors, including commentator Tom Nichols. Predictably, Nichols spent the majority of his time taking hyperbolic hate shots at the president, like this:

The colossal failure of the Trump administration both to keep Americans healthy and to slow the pandemic-driven implosion of the economy might shock the public enough back to insisting on something from government other than emotional satisfaction.

As tempting as it might be, I encourage you not to roll your eyes and ignore those words, because buried inside that little treasure chest of rage is a very revealing assumption. Specifically look how Nichols blames the president and his administration for failing “to keep Americans healthy.” Are we content with accepting that as a reasonable expectation to place on the federal executive branch?

Others in the Politico feature would seem to be. Margaret O’Mara, a professor of history at the University of Washington, predicted,

Not only will America need a massive dose of big government to get out of this crisis…but we will need big, and wise, government more than ever in its aftermath.

And University of Maryland’s associate professor of government and politics could barely contain her glee at the prospect:

The Reagan era is over. The widely accepted idea that government is inherently bad won’t persist after coronavirus … It is no longer “terrifying” to hear the words “I’m from the government, and I’m here to help.” In fact, that is what most people are desperately hoping to hear right now.

Is it? I guess I’m skeptical. Though polls continue to show the majority of Americans are hesitant about lifting the lock-downs and returning to life as usual, the devil may be in the details. What does “as usual” mean, precisely?

Though hardly a representative sample, the majority of Americans I observe are content with accepting the advice and recommendations from government officials regarding hand-washing, face-touching, social distancing, and even face masks. But that contentment quickly runs out when advice and recommendations turn into lock-downs, stay-at-home orders, and forced business closures.

That’s why I think good sense would stop short of making hope-filled predictions like these left-leaning college professors are wont to do. What actually seems likely is that coronavirus is going to renew the civilization-old debate over the role that government should take in our lives.

Perhaps Americans will be enthralled with the sound wisdom of the CDC and their “don’t wear masks, wait, on second thought do wear masks, and actually, if you don’t wear a mask you’re a public enemy” advice. Maybe they’ll be convinced that our freedoms should be determined month-to-month by task-force-created predictive models. Possibly we will all go for a new cabinet-level executive department that will tell us where we can travel and when.

Or maybe all this big government in people’s faces will backfire on the left-wing planners. After all, it’s one thing to accept these kinds of intrusions and disruptions temporarily, when there’s an immediate, self-evident purpose. It’s quite another to adopt them as permanent changes to our way of life.

In the end, it’s possible that much to the chagrin of Politico’s panel, America will be drawn back to the wisdom of her founding, expressed articulately in a recent tweet from libertarian presidential hopeful, U.S. Congressman Justin Amash: 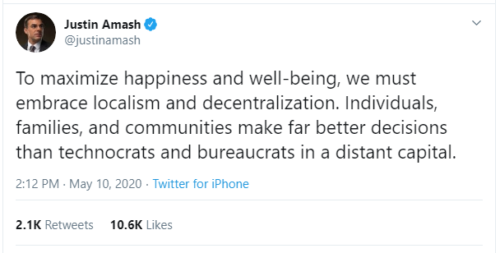 Count me among those hoping so.

This article was originally published at DISRN.com.

Homeschooling Surges Amid the Pandemic

Church Lessons Coronavirus Has Taught Us
b
a
x
r