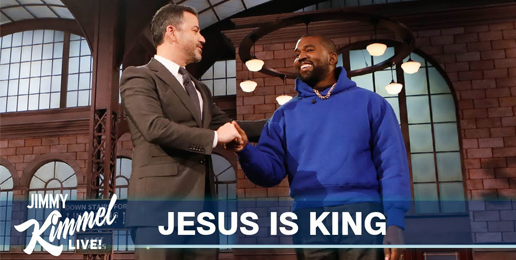 Kanye West’s new album, Jesus is King, has literally taken social media by storm! Kanye’s recent conversion to Christianity has caused a buzz in both the Christian and non-Christian worlds.

Perhaps his most controversial track on the new gospel album is a song called “Closed on Sunday,” (see lyrics) which Kanye performed recently on Jimmy Kimmel Live.

This line in the song has offended many people, especially those in the LGBTQ community:

Closed on Sunday, you my Chick-fil-A
You’re my number one, with the lemonade

Many media outlets including Business Insider, Cosmopolitan, FoxNews and others have written on how Kanye is promoting a fast-food brand, and one that has a strong connection to Christianity. LGBTQ activists are outraged that he would recommend a “homophobic” restaurant that does not celebrate their lifestyles.

It always surprises me how much outrage a Christian-owned chicken sandwich company can generate. But they aren’t the real story here.

In an interview with Zane Lowe for Apple Music, Kayne used the term “closed on Sunday,” in the context of his family life.

“I have to protect and take care of my family and make sure with the power that God has put in my hands that I do everything that I can, as the father, to provide the best chance (for them to be) the maximum success they can be.”

I believe the term, “Chick-fil-A,” in the song is simply a metaphor for a larger context. In the corporate world, the restaurant chain has surprised business analysts by choosing to close one day out of seven, in honor of the Bible’s admonition. Honoring God has paid off in huge financial dividends for the company.

Kanye takes that analogy and applies it to the responsibility a father has in stewarding his home (in the same way a CEO must steward a corporation). Tough decisions need to be made. Can a family take time away from digital and social media in order to focus on God and each other? Can we learn to take a Sabbath from the constant pull from the screens in our pocket?

Hold the selfies, put the ’Gram away
Get your family, y’all hold hands and pray

He is referring here to Instagram (the social media of choice for many teens). He suggests that our time could be better spent looking to the Lord, rather than pictures of ourselves.

He also warns of the dangers that lurk in the world and the need for fathers to protect their children.

When you got daughters, always keep ’em safe
Watch out for vipers, don’t let them indoctrinate

Raise our sons, train them in the faith
Through temptations, make sure they’re wide awake
Follow Jesus, listen and obey
No more livin’ for the culture, we nobody’s slave

As a father of ten, I resonate with these words. This is my desire as well.

In the interview mentioned above, he also described the devastating impact a life-long pornography addiction has had in his life. From his first exposure when he was only five, he said his addiction fueled most of his decisions throughout his life and career. As a Christian man now, he is battling back. As fathers, we all know the temptations that exist for our families. Being intentional and making tough decisions to honor God above our flesh, will result in spiritual health for us, just as Chick-fil-A has experienced business and financial success. In 1 Samuel 2:15 we are told, “Those who honor Me, I will honor.”

Speaking to this issue of temptation, Kayne says, “Jezebel don’t even stand a chance.”

Realizing the parallel Kanye is making by using the “Closed on Sunday” metaphor, and applying it to our need as families to shut things down and re-prioritize, the song shifts from being a cheap advertisement for a company, or a confusing mishmash of random concepts, to a brilliant apologetic for fathers to fight for their families and make hard decisions to honor God and do what is right. The media has this all wrong. This song has nothing to do with chicken, and everything to do with family.