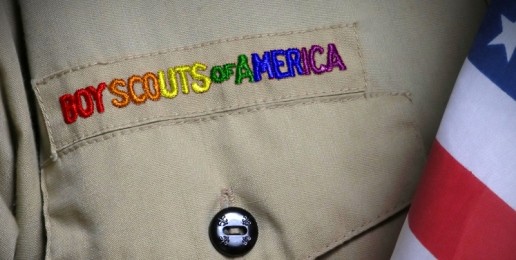 The national president of the Boy Scouts of America, Robert Gates, said Thursday that the organization’s longstanding ban on participation by openly gay adults is no longer sustainable, and called for change in order to avert potentially destructive legal battles.

In a speech in Atlanta to the Scouts’ national annual meeting, Gates referred to recent moves by Scout councils in New York City and elsewhere to defy the ban.

“The status quo in our movement’s membership standards cannot be sustained,” he said.

Gates said no change in the policy would be made at the national meeting. But he raised the possibility of revising the policy at some point soon so that local Scout organizations could decide on their own whether to allow gays as leaders.”

Almost exactly two years to the day, Florida Family Policy Council President John Stemberger predicted on CNN that the Boy Scouts of America would change its policy again and also allow openly gay adults to be leaders within two years. Stemberger who also serves as Chairman of the Board of Trail Life USA, a Christian scouting organization, released the following statement:

“Trail Life USA is saddened by the announcement regarding the anticipated membership change in Boy Scouts of America, as many families and boys will be negatively affected by this departure from their own long-standing principles.  It is tragic that the BSA is willing to risk the safety and security of its boys because of peer pressure from activists groups.  Trail Life USA remains committed to timeless Christian values and to the hundreds of Charter Organizations and 23,000 members in 48 states.”