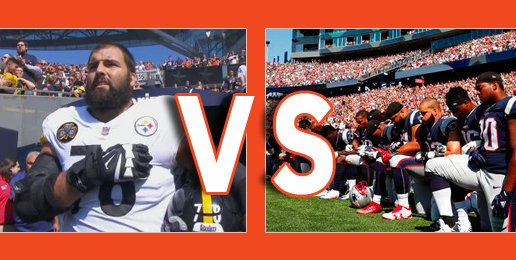 One can’t help but contemplate the amazing momentum surrounding the national anthem protests in the National Football League. What started as a lone individual—former San Francisco 49ers back-up quarterback Colin Kaepernick—taking a knee during the anthem has become a flashpoint of conflict that has spread to the National Basketball Association, the Women’s National Basketball Association, and Major League Baseball.

In the latest and most unified moment of the movement on Sunday, more than 200 players across the league knelt for the anthem. In London, members of the Jacksonville Jaguars and the Baltimore Ravens stood for “God Save the Queen” but knelt for the U.S. national anthem. Ironically, the national anthem singer at the Lions-Falcons game took a knee and raised his fist.

Politicians, chief executives, and Hollywood directors have taken sides, with fans and players taking shots at each other through social media. Even pee wee leagues are getting into the act.

Kaepernick, unemployed since opting out of his contract with the 49ers last season, seems to have gotten what he purportedly wanted: a conversation about racism in America:

“I am not going to stand up to show pride in a flag for a country that oppresses black people and people of color. To me, this is bigger than football and it would be selfish on my part to look the other way. There are bodies in the street and people getting paid leave and getting away with murder.’”

To refresh your memory, the “bodies in the street” were black men and the “people getting paid leave and getting away with murder” were, presumably, white law enforcement officers. If we read Kaepernick correctly, the problem here is that people of color are oppressed, white Americans are the oppressors, and deadly encounters with law enforcement are his primary evidence.

Kaepernick’s way of calling attention to the injustice of racism was to kneel during the singing of the national anthem as the entire stadium of fans removed hats, placed hands over hearts, stood facing the American flag, and sang along. His ostensible moral force for doing so was that he would be “selfish” if he didn’t. I infer by that he meant he had made it big and thus had a responsibility to use his platform to call attention to the issue of white cops shooting people of color.

There was immediate blowback from fans, which Kaepernick ignored as he continued kneeling. Other players began doing the same thing, and from there it has spiraled into the full-blown test of wills between players and fans it is today.

NFL players and those defending them argue that the players have a right to protest. That’s what makes this country great.

Fans argue that these multi-millionaire cry-baby players are disrespecting the flag that represents freedom and the men and women in uniform who have bled and died for their right to protest, and that players should protest on their own time because fans just want to enjoy the game.

The protesters’ argument is somewhat disingenuous because Kaepernick and the others who have followed suit aren’t complaining that they’ve been denied a right to protest. They are taking a stand—excuse me, a knee—against racism in this country. That is the claim we should be discussing.

The fans’ argument is only partially correct because, while members of the military have fought, bled, and died defending the flag and the protests are certainly disrespectful of their sacrifice, there’s something else going on.

No reasonable person disputes that some acts of racism occur in some parts of our country. No one disputes that some white people genuinely hate black people. Neither is there any dispute that some lethal police actions involving black men and white officers are possibly influenced by racial bias.

The problem is that Kaepernick and his imitators are imputing racism to the American flag itself, while the majority of white Americans (and many blacks) proudly identify with the stars and stripes. Thus, white Americans in general, and white NFL fans in particular, believe they are being called racist. In other words, it’s personal.

These are the same (white) fans who pay an average of $86 to attend a game to watch large men in armor play a game of catch while they eat $5 hotdogs and drink $5 sodas and $7 beers after paying $49 to park at the stadium. Seriously: the average cost for a family of four to attend an NFL game is $503. Or, if you live where I do, it’s $601.20 to watch the ever-rebuilding Chicago Bears.

And protesters want to know why fans are upset when a 29-year-old, who got wealthy off the very people who made his salary, fame, and product-endorsements possible, shames them as racists?

These players of color fail to appreciate that white fans love them, too. They buy their jerseys, pin their hopes on them, and love being associated with winners and guys at the top of their game. Heck, as a kid I was a huge fan of Mean Joe Green, Franco Harris and (cough) O.J. Simpson. If one of them called me a racist, I’d find someone else to admire.

Players have also failed to appreciate that most of us ordinary Americans are patriotic, and we will choose our country over an ingrate with an overblown sense of self-importance any day. Even more so when you consider that Kaepernick wore socks depicting police as pigs, took questions wearing a t-shirt displaying a photo of Cuban dictator Fidel Castro (73,000 dead under his regime) and radical muslim Malcolm X, and that Kaepernick’s Muslim girlfriend, Nessa Diab, has posted some controversial comments of her own.

But perhaps the biggest oversight of all is this: nobody needs the NFL.

If tomorrow you woke up and the NFL had simply disappeared, your life would continue. “All you need,” my dad used to say, “is a little water, a little food, and some air to breathe.” Believe me, I can drop my support of athletes by simply changing the channel or turning off the TV. I like what the NFL sells, but I don’t need the eleven minutes of actual play I get to see out of a three-hour game (HT: Michael Walsh).

The only thing the NFL and its owners and players understand is what the Bible calls a root of all kinds of evil: the love of money. Money is the lifeblood of the NFL and television ratings are the plasma. NFL attendance is down this season, and TV viewership continues to plummet. The way to their heads is through their bank account, and fans have figured that out.

It didn’t have to be this way. It was immediately apparent that Kaepernick’s initial protest was offending a major portion of the NFL audience. The commissioner, Roger Goodell, could have stepped in and stopped the practice, but he’s chosen to double-down on the off-topic “right to protest.” This will not end well for him, the players, or the league because fans now know how at least 200 players feel about the country and, by extension, them.

Colin Kaepernick had (and still has) the right to protest. If current trends hold, however, he may be remembered not as the hero of racial reconciliation but as the man who single-handedly brought down the NFL. And in that scenario, the losses far outweigh any good he might have done.