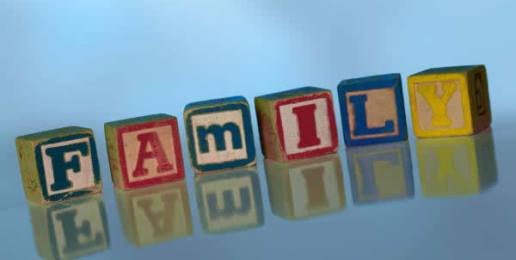 Remember when, as a kid, you’d build a wall with building blocks and then you or someone else would come along and knock it down?  The one who knocked it down was usually laughing while the one who built it wasn’t very happy at all.  Ah, those were the days.

God has built such a wall.  Man has been tearing at this wall and laughing all the while; however, God is not amused. While people want to point fingers of blame in every direction we should stop long enough to recognize that perhaps the finger should really be pointing at us.

Society is made up of building blocks, the most basic of which is the family. God designed what that block should look like, one man and one woman in a covenantal relationship with Himself until death do they part. This is the fundamental building block of society and our nation. As we move away from God’s boundaries for marriage we are knocking down the wall of protection for society and are watching its demise.

Until death do they part:  Do you remember when divorce was very uncommon? It used to have a stigma attached to it and was to be avoided at all costs. You worked at marriage and invested in each other. It was difficult to get a divorce.  Why was it difficult? Because we took seriously our oaths to each other and to God.  It was difficult because it hurt the children, it hurt the couple, the families, and it hurt society. Why does it hurt? It hurts because man is tearing apart what God has placed together.  It hurts because the two are no longer two; they are melded into one. It hurt because the fabric of our societal building blocks was being attacked.

As we removed the end of God’s marriage definition – until parted by death – divorce became more acceptable, the family unit suffered instability, children were confused, violence became a little more commonplace, and the block wall of society was nudged and shook. Public schools often became the greater influence in the lives of children. We can’t ignore that divorce goes against the will of God. As man elevated himself above God and cared more for the creature (himself) than the Creator he started walking down a dangerous road of self-destruction.

Since divorce and infidelity were now more commonplace and the term “marriage” lost much of its sacredness and stability why bother getting married? Many young adults started buying into this and felt cohabitation was just as good as being in a covenantal relationship with God. Even the church seems to have forgotten that God is an integral Person in the marriage, seeing that many will perform weddings for those who have been married and divorced several times.  As God has been ignored and sinned against the blocks of society are nudged even harder and some have fallen while others sit precariously on the precipice, teetering as they barely stay intact.

God is pushed further out of marriage and society. Schools and gangs became the most stable influences in many a young person’s life.  The school indoctrinates on sexuality, false religions and societal norms. Television and its unbiblical influences mold minds of young and old alike until they come to the conclusion that there are no absolute truths – other than the lie of evolution which is taught as truth, and the definition of marriage (and many other words) doesn’t matter. As children watch adults move from one sexual relationship to another they themselves mimick parents and television believing that sex is free and for everyone with no negative consequence.

One man and one woman: This brings us to the beginning of God’s definition of marriage. Society and church has already removed God completely from the definition; so why should it matter? It matters because to add wrong upon wrong isn’t right.  It matters because it’s unnatural and where will all the unnaturalness end? We’ve already seen people make stands for polygamy, pedophilia and bestiality. It’s wrong because we have current laws which are in accordance with the word of God and such laws need to be enforced. It’s wrong because the very fiber of our society is already being torn to shreds and it needs to be mended, not mutilated more.

It’s been wrong since the beginning of time and even from the beginning of this nation. Homosexuality (sodomy) was viewed by George Washington with “abhorrence and detestation.”  Noah Webster defined “sodomy” as “a crime against nature.” (To see where other founding fathers stood on the issue click here.) As a nation we have grown in arrogance and pride, leaving God’s pattern for society –not just marriage- and substituting our own evil design for it. Do we think we can poke our finger in God’s eye without any repercussion? Our nation, our society is on the edge of destruction; the walls are crumbling as those who see the danger shout out warnings.  These watchmen on the walls are called haters, judgmental, and labeled as “…phobes,” depending on which issue they take a stand for.

We are guaranteed freedom of speech but those who disagree with the minority or those who speak God’s truth are shouted down with insults and lies.  I am not hateful because I speak a warning of truth.  Isn’t it much worse to be silent and allow the destruction of a person or a nation?  Often those who make accusation of being judgmental are doing that very thing – judging. They take scripture out of context and say, “Judge not lest ye be judged.” The surrounding scripture tells us to judge actions. I fear God; I don’t fear men; so calling me a homophobe or Islamaphobe holds no real meaning.  These accusations are meant to quiet the masses and to intimidate Christians.

Our founding fathers would tell us that moral freedom is NOT the right to do whatever you want; it’s the power to do what you ought. It’s time to stop being quiet and intimidated.  It’s time to speak and believe in the gospel of Jesus Christ.  It’s time to stand with Paul as he says in Romans 1:16, “For I am not ashamed of the gospel of Christ: for it is the power of God unto salvation to everyone that believeth; to the Jew first, and also to the Greek.”  If you read the rest of that chapter you’ll read of sin running rampant to its destructive end.  But it is the gospel (v 16) that turns destruction to construction.

Why is it that the walls of society and family are toppling down around us?  Why is it that there are those who want to be hostile and accusatory while seeming to be void of common courtesy or common sense? It’s because we need Jesus. Our society and families needs Jesus; our crumbling walls need Jesus to be the cement that repairs and holds them together. Jesus is the salve that will heal our hurts.  He is the One who moves us from death to life. There is forgiveness in the One who came to save. Jesus will either be a stumbling block to you or He will be the building block of a new life which truly means freedom.

This article was originally posted on the AmericanDecencyAssociation.org blog.