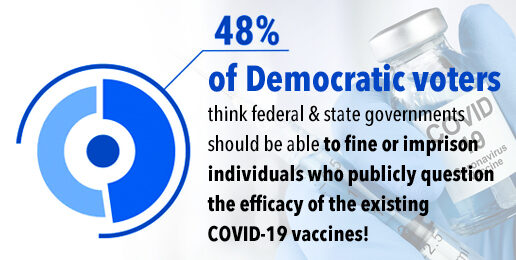 There is a new poll from Rasmussen Reports that is flat-out scary. First, here is a finding that probably won’t surprise you. Americans are split evenly on President Biden’s vaccine mandate.   Roughly half (48 percent) of voters favor President Joe Biden’s plan to impose a COVID-19 vaccine mandate on employees of large companies. (The U.S. Supreme Court just declared this unconstitutional.)  The same percentage of voters oppose this.

Nearly 6 out of 10 voters (58 percent) would oppose fining Americans who do not choose to get the COVID vaccine. However, the poll contains a very disturbing mindset in the deeper numbers among Democrats.

A near majority of the Democrat party, and in my view the mainstream media which shills for the DNC daily, is moving dangerously toward far-left totalitarianism under the cover of the COVID pandemic. President Biden’s strongest supporters are the most likely to support the harshest punishments of those who question the COVID narrative.

The poll didn’t ask this, but I would bet that close to 90 percent of those in favor of these ruthless steps would falsely claim that they believe in “tolerance.”

The poll was conducted on Jan 5, a time when the 91 percent less fatal Omicron variant was (and still is) upon us. Many scientists believe that the COVID virus is following the paths of other viruses by becoming more transmissible but weaker. They also believe that this mass Omicron infection, which is impacting both the vaccinated and unvaccinated, will boost national immunity. Historically, most pandemics of this kind last about two years.

Top Expert Sounds Alarm on Surge in Antidepressant Use