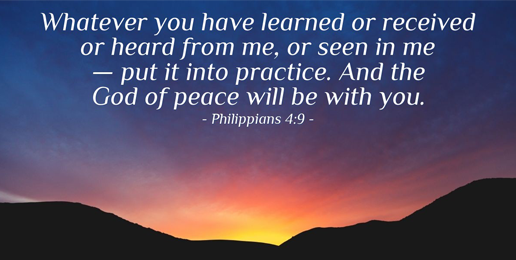 Recently I read the above verse in Philippians and it made me stop. At first glance, it appears redundant. Why does Paul use four words (learned, received, heard, and seen) when he could have just said “learned”? After all, wasn’t that the point? He’s basically telling them, “Do the things you’ve learned.”

But then it struck me: Paul is outlining—in reverse order—the entire discipleship model.

As a father, this is a model I need to understand and implement with my children. After all, I’m called to train and nurture them in the ways of the Lord. If any relationship in the world needs an effective model of discipleship, it’s a father with his children.

Let me say at the outset that I haven’t mastered this. In fact, I’ve got a long way to go. But this is the model I want to follow.

One interesting thing about this model is that it places responsibility on both the mentor and mentee—it’s not just a top-down model.

Let’s take a closer look at each element.

As I mentioned, Paul is essentially listing the elements of discipleship in reverse order. I’ll turn the order back around and we’ll see the logical progression.

Seen in me: Paul tells the Philippian church that they’ve seen certain things in him that they should implement in their own lives. In other words, there was modeling taking place. Paul was a living example of the very things the Philippian Christians needed to do.

If they don’t see these things lived out on a consistent basis, my words won’t matter much.

Heard: As important as example is, teaching is also important. Modeling the Christian life for my children is where discipleship begins, but teaching is where they can begin to understand the why behind the what. This is where we can give form and body to the lessons they need to learn.

If my children see me drop some money in the offering plate at church, that’s good. But it’s better if they not only see me do that, but also hear me explain the why behind giving.

Both of these first two elements place the responsibility squarely on my shoulders as the Dad. I initiate the process. I show. I tell.

But notice the next element.

Received: This phase of the process places the responsibility on my children. At some point as they grow up, they’ll have seen my example. They’ll have heard my teaching. And then it will be up to them to receive what I’ve given them.

Interestingly, this receiving is still separate from doing. (Remember that Paul tells the Philippians to do the things they’ve learned, and received, and heard, and seen in him.) Apparently this receiving is a personal acceptance of what is true and right, but it doesn’t extend all the way to active application.

Learned: Even after our children have accepted the truth as true, there’s still more to learn. If we teach them the truths of God consistently from a young age, many of them will receive that truth with only a partial understanding of it. Thus, they need to keep learning in order to develop a more complete knowledge.

This phase places responsibility on both me and my children. I need to keep modeling and teaching, and they need to keep learning.

Do: This is the final step. This is the culmination of our efforts. We’ve modeled and taught, our children have received and learned. Now it’s time for them to do.

The fact that Paul urges the Philippian Christians to action is instructive in itself. It’s remarkably easy to know the truth—to have received it and learned it—and then sit back passively and never get around to doing it.

We want our children to get around to doing.

But guess what? It starts with us.

We know that we need to model and teach. As Dads, most of us have probably received that truth. We’ve even learned about it.

But that’s not enough.