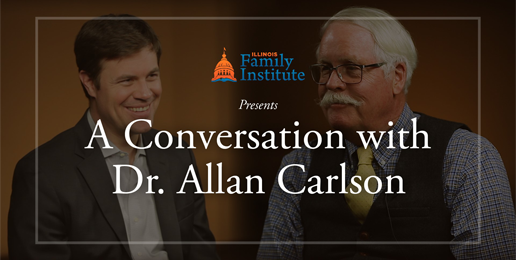 In his interview with Derek Buikema of Orland Park Christian Reformed Church, Dr. Allan C. Carlson discusses the current political climate as it relates to American Christianity and the family. Certain policies, for example, though promoted by the Republican party, are detrimental to the family. If replaced or improved, Carlson argues, conservatives could restore the focus on marriage, children, and the family in our country as well as improve the economy. Using examples from Hungary and other countries, Carlson delivers his opinions on reshaping conservative politics to more truly reflect Christianity, as well as his ideas on why Christians ought to be involved in politics at all at this time.

Dr. Carlson is President Emeritus of the Howard Center for Family, Religion and Society (previously known as the Rockford Institute). He is the John Howard Senior Fellow at the International Organization for the Family, and Editor of The Natural Family: An International Journal of Research and Policy.

Dr. Carlson is the author of the books, Family Questions: Reflections on the American Social Crisis; The Swedish Experiment in Family Politics: The Myrdals and the Interwar Population Crisis; From Cottage to Work Station: The Family’s Search for Social Harmony in the Industrial Age; The New Agrarian Mind: The Movement Toward Decentralist Thought in 20th Century America; Society, Family, Person; and The American Way: Family and Community in the Shaping of the American Identity.

Dr. Leithart: What Has Happened to Christian Institutions?