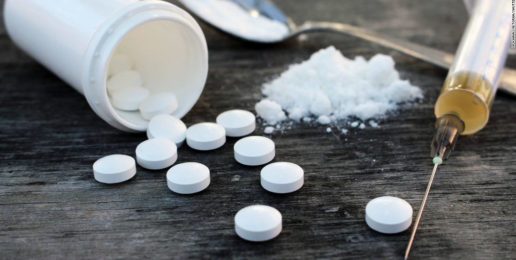 State’s Attorney Jerry Brady speaks to the Peoria Patriots about the Opioid Problem.

He mentioned that over the last couple of years, he and a group of others have been meeting to form a plan on changing the heroin issues in the Peoria area. They have focused on creating more awareness in the community and understanding the root and cause of the increasing Opioid problem.

Brady began with a story about a farmer in Ohio– Mr. Winemiller. Mr. Winemiller and his 3 children own a 3,400 acre farm in Blanchester, Ohio. In March 2016, Mr. Winemiller walked into their bathroom to find his daughter, Heather, lying on the floor with a syringe by her side; she was pronounced dead from an opioid overdose.

About 9 months later, his older son, Eugene, was found in his mother’s home overdosed and unable to be revived. The middle child, Roger, is Mr. Winemiller’s only surviving child. At age 60, he drives his son Roger to therapy and rehab treatment every week to help with major drug addictions Roger has had in the past including opioids, heroin, and methamphetamines.

Sadly this story is more common than we think, especially in small towns across the Midwest.

The United States makes up about 5% of the world’s population, but consumes about 80% of the pain killer/opioid medication in the world. A lot of this stemmed from a research article published in the 80s. A pharmaceutical company made the claim that opioids aren’t addictive. With this major risk eliminated from pain treatment, hospitals all over the country began to treat pain as an illness. Hospitals found that the faster and more controlled pain was for patients, the higher patient satisfaction.

From Prescriptions to Heroin

The most common addiction sources are from sports and work related injuries. Studies have shown 7 out of every 10 long-term pain medication users (opioid users) transfer from opioids to heroin. They are usually prescribed to manage the pain– as doctors realize an addiction risk may be occurring, they stop prescribing. The addiction is often so strong, people look for alternatives to relieve the pain and achieve that “high.” Heroin is half the price of prescription drugs on the streets.

How It Began & Spread

The problem increased due to a small village in Mexico deciding to start a retail business in a small town in Ohio. The business was marketed as a delivery of heroin right to your doorstep– no need to meet in public place. They were one-man vehicles that would drive to the small towns and deliver door to door. This “retail business” spread to Kentucky and Indiana and is now all over the Midwest.

They have been hard to track because of operating under the radar.

In 2015, Peoria had 36 deaths that were attributed to opioid and heroin overdoses. In 2016, this number dropped to 32. The problem is if an individual is brought to the hospital and has no involvement in criminal action– their deaths from overdosing are classified as “accidental deaths”. There are proposals to change this to better understand the magnitude of the problem.

The CDC has identified the issues and developed guidelines

Last year a group of over 50 physicians from Peoria came together to discuss the issues with pain medication addictions and prescribing issues. They physicians in this area understand there is an issue that must be adjust– but the question is how. We cannot arrest our way out of this issue.

Brady spoke about prosecuting the heavy dealers, giving the Dealer Users an opportunity to get treatment and light charges. With level 3 treatment comes first.

Once addicted to opioids and heroin, it is a struggle people will deal with their entire lives.