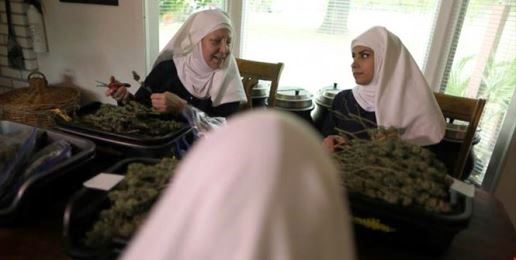 Just when you think you’ve heard it all, a pastor calls your radio show asking how to respond to a congregant who claims that cannabis was sanctioned by God in the Torah. That’s right, sanctioned by the Lord Himself, not to be smoked but to be burned in large quantities by the priests of Israel. Far out!

To be sure, there was a time in my life when I would have readily believed something like this, since I spent 1969-1971 as a heavy drug-using, hippie rock drummer, consuming everything from pot to LSD and from speed to heroin. Not surprisingly, when my two best friends starting reading the Bible, telling me about the more esoteric passages in the Scriptures – all kinds of visions and dreams and revelations – I asked them in jest, “What were they smoking?”

That, in fact, is what I asked the pastor (again, in jest) who called the show: What is this congregant smoking?

It turns out that there is an alleged scholarly basis for this bogus belief, namely, that the Hebrew words qaneh-bosem in Exod 30:23 refer to marijuana, or, more specifically, hemp. And note the apparent similarity in the words: qaneh-bosem and cannabis. That proves it, right?

According to the Herb Museum website, it was in 1936 that a little-known Polish professor named Sara Benetowa (later Sula Benet) wrote, “The sacred character or Hemp in biblical times is evident from Exodus 30:22- 23, where Moses was instructed by God to anoint the meeting tent and all its furnishings with specially prepared oil, containing hemp.”

This was allegedly confirmed by other Hebrew scholars. And obviously, with the rising popularity of marijuana in today’s culture, arguments like this have great appeal for Christians who want to get high. Not only did their state pass a pro-pot law, but God’s into it too!

As one website proclaims in bold, red letters: “The fact is that the Holy Oil contained 6 Pounds of  (Marijuana) with other spices boiled into one gallon of Olive oil! The Holy Oil of God is illegal to obtain today!!!”

During my drug-using years, I often went to rock concerts at the Fillmore East in New York, seeing groups like Led Zeppelin and the Who and the Grateful Dead and Jethro Tull, among many others.

It was the perfect concert atmosphere, seating only about 2,000 people and with a dynamic light show behind the performers. But it was also a hippie paradise, since the whole place smelled like pot. Is that what the ancient Temple smelled like in Jerusalem? Maybe the priests got high on mushrooms too!

Returning to reality, the alleged connection between qaneh-bosem and cannabis simply doesn’t exist.

Note first that qaneh-bosem is two words in Hebrew, not one. And the words are easily translated, qaneh meaning a stalk or reed, and bosem meaning “sweet smelling.”

Some scholars translate the words together to refer to “aromatic cane,” “scented cane,” or “sweet-smelling cane,” others “sweet calamus” or “fragrant calamus.”

But not a single scholarly, biblical Hebrew lexicon in the world connects these words with cannabis. I can say that emphatically because I own them all, in multiple languages. The alleged connection isn’t there.

It is also certain, for various phonetic and linguistic reasons, that the word cannabis, which comes from the Greek kannabis, is not related to these two Hebrew words. To put it bluntly, there’s no more connection between Hebrew qaneh-bosem and Greek kannabis than there is between “Moses” and “mice.”

As for those who can’t study the issue for themselves, note carefully this commandment to Aaron, the High Priest, and his successors: “Drink no wine or strong drink, you or your sons with you, when you go into the tent of meeting, lest you die. It shall be a statute forever throughout your generations” (Lev. 10:9). Sobriety was a must for those coming into the presence of God.

This makes the claim all the more ridiculous that the Lord commanded large amounts of pot to be burning in this very same holy place. Yes, be sure not to drink any wine or strong drink, but go ahead and inhale deeply!

As for those Christians who feel that smoking pot “in moderation” is fine, since it’s now legal in their state, a word of caution.

First, pot remains a gateway drug, often leading to the use of other, harder drugs, along with becoming addictive in and of itself.

Second, pot today is far more potent than when I smoked it more than 46 years ago.

Third, new studies are pointing to health risks and driving risks associated with marijuana. (See here on pot use in Colorado.)

Fourth, you’ll have a hard time fulfilling the biblical mandate to “be sober and vigilant” (1 Peter 5:8) while smoking a joint.

What I can tell you without hesitation is that God never prescribed pot – as incense or to be smoked – anywhere in the Bible. That’s a fact.