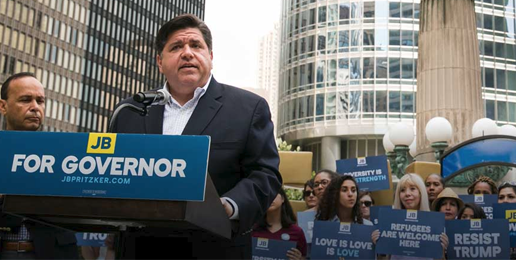 Just hours after after his election-night victory speech, Governor-elect J.B. Pritzker has been making the rounds with Chicago media, talking up plans to make marijuana a priority in Illinois, telling one news outlet that it is “something we can work on nearly right away.”

Apparently Pritzker’s top priorities do not include tackling issues like job creation, inner city violence, opioid addiction, a shrinking population, public pension reform, or education reform. Pritzker apparently believes the inaccessibility of recreational pot is among Illinois’ most pressing problems. And the liberal media is all too willing to assist by advancing pro-pot talking points about how much money the state can rake in by taxing yet another vice.

Yet not many journalists and pundits are taking a hard look at the serious consequences of legalized recreational marijuana despite a plethora of evidence from states like Colorado and Washington, both of which legalized it in 2012.

IFI has been working hard to make people aware of the dangers associated with high-potency marijuana. We have established a dedicated page to help Illinois residents understand this issue better, so they will be equipped to speak out before it is too late. We encourage you to visit this page, titled “Resources on the Truth and Consequences of Marijuana.”

Additionally, we want to urge you to look at a series of webinars created by NoWeedIllinois.com, a coalition of organizations that are opposed to the legalization of recreational marijuana. These webinars offer troubling information that may surprise citizens. For example, Dr. Karen Randall is featured in one webinar testifying on how emergency rooms in Pueblo, Colorado have been overwhelmed with marijuana overdoes, hyperemesis (known as “scromitting”), psychosis, polysubstance use/abuse, and acute cardiac issues.

In another webinar, Dr. Ken Finn highlights marijuana’s negative effects on the heart and lungs, the increase in driving fatalities and the increasing problems of youth use. He also dispels the myth that marijuana legalization can help cure our opioid crisis.

Perhaps the most shocking webinar features Dr. Mourad Gabriel who exposes an unfolding environmental disaster as many marijuana growers are poisoning the soil and water supplies and are killing wildlife.

There are other webinars on the No Weed Illinois YouTube page and even more information on their Facebook page. I cannot stress enough the importance of learning what may be coming our way in the very near future.

When J.B. Pritzker and the new Illinois General Assembly is sworn in for the 101st Session in January 2019, there will be super majorities of Democrats in both the House and Senate. House Speaker Michael Madigan (D-Chicago) will have 73 members in his caucus, while Senate President John Cullerton (D-Chicago) will have 39 members in his caucus. Unless there is an deafening hue and cry from citizens across the state, this policy will be foisted on us all with little to no regulation. If you’d like to know what that looks like, please watch or listen to this presentation by Jo McGuire.

Please pray that our state lawmakers will listen to the objections and concerns of industry leaders, law enforcement officials, clergy members, educators, parents and grandparents in this once great state. May God have mercy on us!