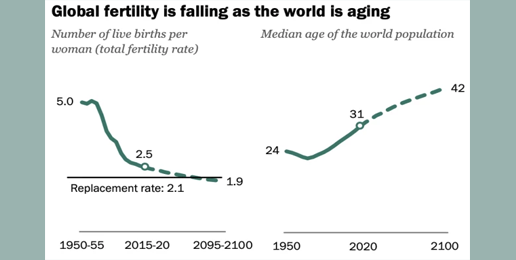 The “hook” of the story intrigued me: “This hasn’t happened in all of modern history…” An email from “The Crux” last month blared, “Global population growth to virtually stop by 2100.”

According to a Pew Research Center analysis, “the world’s [human] population is expected to virtually stop growing by the end of this century, due in large part to falling global fertility rates.” This isn’t a new story (e.g., Ben J. Wattenberg’s 2005 book, Fewer), but it’s worth identifying the reasons for this momentous, unprecedented development.

Procreation is a biological imperative. Every other species on Earth perpetuates itself through procreation unless external circumstances thwart that natural process. If you saw the amazing documentary, “March of the Penguins,” you could see how the penguins were hard-wired to breed at a certain time every year, like clockwork. If you have a dog in heat, let her outdoors for 15 minutes, and if there is another dog loose within a half a mile, you will have a pregnant dog. Instinct takes over and dictates that animals breed.

Humans are different. We can choose not to procreate. We have even developed technologies (most famously, “the pill”) to help us avoid having children. Liberal abortion laws further curb human births.

Humans are deliberately choosing to have fewer children than ever before. The key question is: Why?

The article cited above says that the human population has never before stopped growing in modern history. For most of history, there was a virtual lid on the human population. Even though millions of women gave birth to 10 or 15 babies or more, poor sanitation, poverty, war, pestilence, and famine killed off a majority of children before they could become old enough to have children of their own.

Modernity changed all that. The Age of Enlightenment – though it gave rise to ideologies both liberating and destructive – generated massive new wealth creation and immense progress in science and technology. In just the last two centuries, life expectancy more than doubled. The human race experienced a population explosion. More people lived longer lives and at higher standards of living than had ever been possible in pre-modern times.

Some alarmists predicted that human over-population would lead to catastrophe, but something happened on the way to the apocalypse. The decision of millions (billions?) of women around the world to have fewer children has created a different and unanticipated set of challenges and problems.

For example, “between 2020 and 2100, 90 countries are expected to lose population,” including 32 countries in Europe, Russia, China, and Japan. Even in the United States, the population will fall unless augmented by immigration. These trends have enormous implications, both positive and negative. On the positive side, aging populations are far more likely to have democratic rather than autocratic governments, and they are less likely to go to war. On the negative side, for today’s affluent societies now heading toward population implosions, the balance of economic and geopolitical power and influence in the world will shift, and probably not in ways favorable to us.

In looking at our own society, I see three categories of reasons for why American women are having fewer children: ideological, philosopical/spiritual, and economic.

Among the ideological causes underlying the birth dearth in the United States are those found in the environmental movement. Over the past 50-plus years, some Americans accepted as true the warnings of a destructive population explosion. Groups like ZPG (Zero Population Growth) preached that having children – especially more than two of them – was hazardous to the welfare of the human race. Extreme greens today disparage human life as a “cancer,” a “plague,” “vermin,” “a disease,” etc., and openly long for humans to decrease.

The main philosophical reason is the rampant materialism and concomitant lack of spirituality in our age. Materialism breeds a preoccupation with self-satisfaction and self-indulgence. Individuals shun traditional adult joys and responsibilities like marriage and child-rearing for a self-indulgent lifestyle that exalts sexual pleasure above familial commitments. Such people have turned inward. They no longer think in terms of sharing the gift of life, or rearing children to the glory of God, or giving our country another generation to add to the greatness of America. Instead, they look for sensual gratification and momentary pleasures.

The main economic reason for the decision to have fewer children is that people who are new to affluence understandably want to keep that affluence secure. They will naturally, then, avoid having more children than they can comfortably afford.

Also, seeing how Big Government increasingly promises to take care of their health and retirement needs, the traditional reason for having children – having someone to care for us in our dotage – seems passé. But here it is possible that we Americans have been too clever by half: We might not have procreated enough children to provide a large enough tax base to afford the enormous costs of senior-care. (Europe is already facing this problem.)

And if that isn’t shortsighted enough, we also have dumped almost $23 trillion of debt on the rising generation. How are they ever going to bear that massive burden as well as the additional economic burden of paying enough taxes to fund Social Security and Medicare?

It is said that history sometimes moves like a pendulum. Currently, the pendulum has swung toward too few births in America. We will find out in the coming decades what the fateful consequences of that trend will be.

Dr. Mark W. Hendrickson is a retired adjunct faculty member, economist, and fellow for economic and social policy with the Institute for Faith and Freedom at Grove City College.

This article was originally published at the Institute for Faith & Freedom.